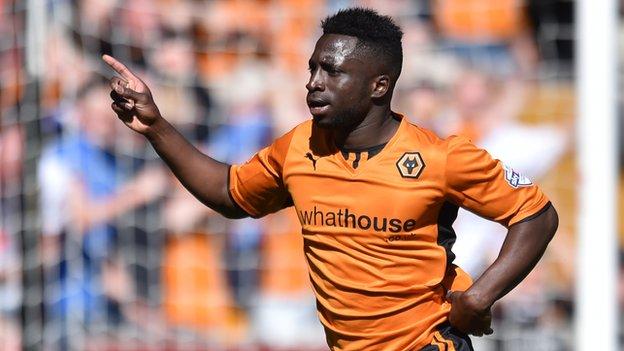 Wolves scored two last-gasp goals to beat Rotherham in an incredible game and close in on the League One title.

Agard's second and Dicko's hat-trick goal made it 4-2 after half-time, but the Millers levelled late on through Joe Skarz and Agard's third.

Brentford's win over Preston North End means Wolves still need four points to be certain of the championship, but because of their vastly superior goal difference one more victory will realistically be enough.

The hosts fell behind when Agard's header from Michael O'Connor's corner drifted past goalkeeper Carl Ikeme.

But the Millers, who were already assured of their play-off place, were second best thereafter and could not cope with the attacking quality from Kenny Jackett's side.

Dicko, who scored six goals in six games for Rotherham when on loan from Wigan earlier this season, stabbed home a cross from Bakary Sako to level and fired in a second from 10 yards.

It was 3-1 when Scott Golbourne found Edwards, whose well-placed shot was his third goal in as many games.

Agard's shot on the turn gave the visitors hope but that hope seemed to be quickly over as Dicko converted an Edwards cross for his treble.

Rotherham came again and looked to have earned an unlikely point when James Tavernier's 84th-minute cross was volleyed in by Skarz and Agard completed his hat-trick four minutes later.

But Wolves skipper Ricketts blasted home from 20 yards for the ninth goal of a remarkable afternoon's entertainment at Molineux.

And McDonald completed the scoring from close range in time added on.

Shots on Target
Home7
Away10