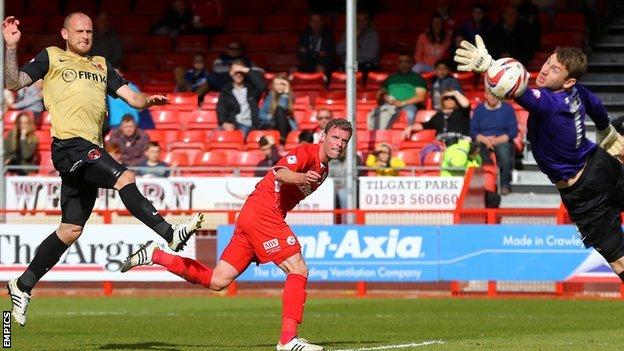 Both sides wasted early openings but the O's, who have now won once in seven games, fell behind when Gwion Edwards fired a low shot into the corner.

David Mooney then went close for the visitors, who equalised through a toe-poked effort by Chris Dagnall.

Mooney might have levelled for Orient, but his low shot was saved by goalkeeper Paul Jones and the striker also had an injury-time shot cleared off the line.

A point would have meant that the O's could still have drawn level on points with Brentford.

But their win over Preston North End, coupled with Orient's defeat and Rotherham's loss at leaders Wolves, means the Bees are promoted to the Championship.

"We deserved the victory today, we knew it was going to be difficult and today was a very close game.

"I'm so proud of our boys, we've played three games in seven days. It's been a monumental ask. The way they wear the shirt makes me proud.

"Kyle McFadzean is my John Terry, he's been amazing for this football club. I was exceptionally proud of his performance today."