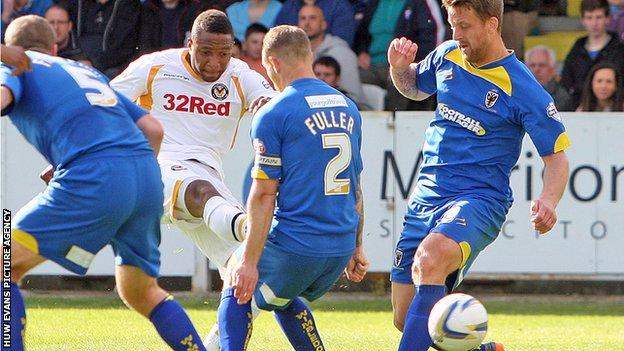 AFC Wimbledon came back from two goals down to secure a point at home to Newport County in League Two.

Chris Zebroski's spectacular volley gave Newport the lead before Michael Flynn doubled the lead from the penalty spot after Christian Jolley was fouled.

Kwesi Appiah reduced the deficit after Newport failed to clear a free-kick.

George Francomb equalised for the hosts when his long-range effort took a deflection to beat Ian McLoughlin.

Newport County striker Aaron O'Connor came on as a second-half substitute to make his first appearance of the season after a lengthy injury lay-off.

"I'm bitterly disappointed. I thought we were as good as we've been for a long while in the first half.

"From going 2-0 up we should have gone on to win the game comfortably.

"We've then put ourselves under pressure and allowed Wimbledon a big lift in the game which they hadn't worked hard for."