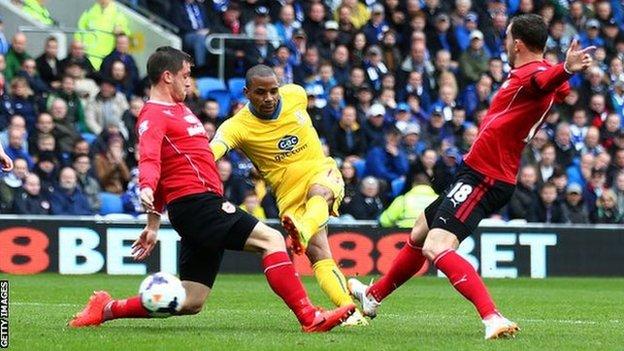 The Bluebirds allege Palace knew their line-up 24 hours before a recent match and have accused them of obtaining that information by underhand means.

Cardiff confirmed chairman Mehmet Dalman had been in touch with Premier League officials about the matter.

Given no official complaint has been made by the Bluebirds, no investigation is currently taking place.

"What Cardiff have done is ask the Premier League to look into this," said BBC Wales football correspondent Rob Phillips. "They were bitterly unhappy that it appears their starting line-up was leaked."

Crystal Palace chairman Steve Parish declined to comment on the grounds that he did not want to give the accusations "oxygen".

Cardiff are gathering evidence to present to the Premier League, and have instigated disciplinary proceedings against two employees.

Neither employee is a player, and at the scheduled Friday media conference Solskjaer categorically denied suggestions that a player had been involved.

Club captain Steven Caulker said he was "frustrated" because the row could be a distraction from the fight to avoid relegation.

"To be honest there's been things like that all season where certain things have been leaked," he said.

However he later clarified that he was referring to "leaks" about matters other than team selection.

"For me it's frustrating because we need to focus on what's going on on the pitch and not what's happening off the pitch," Caulker added.