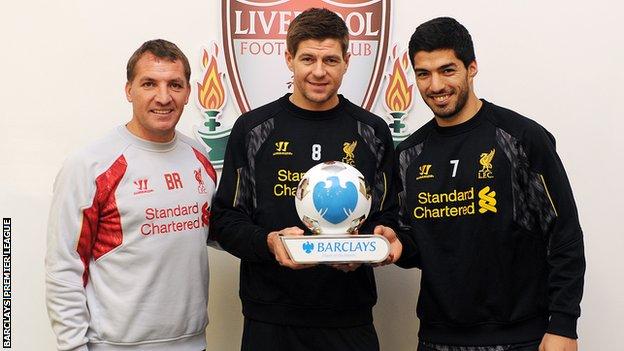 Liverpool midfielder Steven Gerrard and striker Luis Suarez have been named joint Barclays Player of the Month for March.

It is only the sixth time the honour has been shared.

Their manager, Brendan Rodgers, has been named Manager of Month for the second time this season.

The Player of the Month award has been shared on five previous occasions:

It is the sixth time England captain Gerrard, 33, has won the award in his career.

Suarez, who is the Premier League's leading scorer with 29 goals, added six more strikes to his tally in March.

The Uruguayan, 27, was also named Player of the Month in December.

Rodgers has also landed the managers' award previously this season, picking it up in August following the Reds' good start to the campaign.

Liverpool have won nine successive league games, the most recent being a 2-1 victory at West Ham on Sunday which took them two points clear of Chelsea at the top.

They face title rivals Manchester City at Anfield on Sunday.