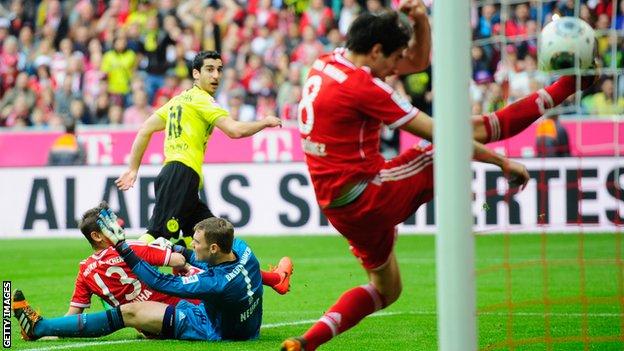 Bayern were 2-0 down at the Allianz Arena when Marco Reus scored after Franck Ribery lost possession.

Dortmund wrapped up the points when Jonas Hofmann found the net before Bayern's Rafinha was sent off.

Behind the Bundesliga champions

Bayern Munich have been 1-0 behind in their last five competitive matches. The last time this happened was 2001.

The Brazilian defender was shown a straight red card in stoppage time after putting a hand in Mkhitaryan's face.

It completed a frustrating game for Bayern, who started with Toni Kroos, Thomas Muller and Jerome Boateng on the bench ahead of Wednesday's German Cup semi-final with Kaiserslautern.

The hosts, who have now failed to win all three league games since being crowned German champions last month, were a shadow of the team who has dominated on the domestic and European stage this season.

While Bayern lost at home in the league for the first time since October 2012, this result will at least soften the blow for second-placed Dortmund after a one-sided title race. Despite victory, Jurgen Klopp's side are 17 points behind the champions with four games of the league season remaining.

They never looked back after Armenia midfielder Mkhitaryan's composed 20th-minute finish following an incisive run and inch-perfect pass from Reus.

Mario Mandzukic wasted a chance to level shortly before the interval, the Croatian hooking his shot wide after Rafinha's floated ball, and it was a costly miss as Reus doubled Dortmund's advantage soon after Bayern goalkeeper Manuel Neuer had gone off injured.

Neuer's replacement, Lukas Raeder, was beaten after Ribery gifted possession to Dortmund, which allowed the visitors to pour forward and score.

Mandzukic had a goal ruled out for offside before Rafinha was sent off for putting his hand in Mkhitaryan's face, in what was a sorry end to a sorry night for Bayern.