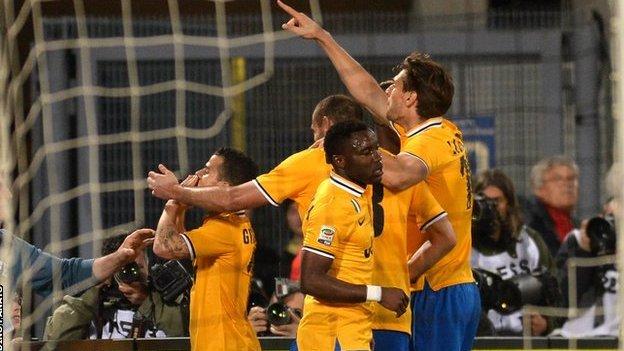 Juventus took another step towards the Italian league title with a comfortable win at Udinese.

Sebastian Giovinco scored a superb early opener, turning smartly on the edge of the area before curling home.

Fernando Llorente stabbed home the second in a crowded penalty area to ease the visitors into a lead that was never seriously threatened.

Chasing a hat-trick of Serie A titles, Juventus are eight points clear of Roma, with only five games remaining.

Giovinco was selected in place of the rested Carlos Tevez and came close to netting a second when he fired against a post midway through the second half.

Juventus eased off after that, although Udinese barely created a chance of note until Luis Muriel's injury-time shot beat Gianluigi Buffon but bounced back off the post.

The result means Juventus will render their top-of-the-table clash with Roma on 9 May meaningless if they win their next three matches.