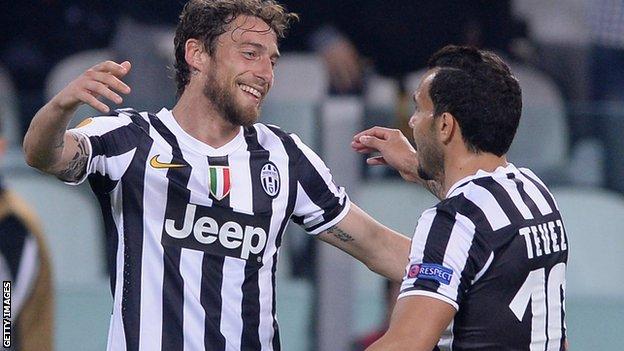 Jorge Jesus's side, beaten by Chelsea in the final last May, have been drawn at home in the first leg.

Sevilla and Valencia will contest an all-Spanish semi-final in the other tie following Friday's draw in Switzerland.

The first legs will be on 24 April, and the return legs on 1 May, with the final to be played at the Juventus Stadium in Turin next month.

That would mean home advantage in the final for Antonio Conte's Juve side, who are eight points clear at the top of Serie A and unbeaten in 12 Europa League matches, since a 4-1 defeat at Fulham in the last 16 in March 2010.

They secured a 3-1 aggregate quarter-final victory over Lyon by winning their second leg 2-1 in France on Thursday.

Benfica, who beat Tottenham in this season's last 16, are the only one of the four semi-finalists never to have won either the Europa League or its predecessor, the Uefa Cup.

Valencia are facing La Liga rivals Sevilla in European competition for the first time, having come back from a 3-0 first-leg deficit to beat Swiss champions Basel 5-3 on aggregate in their quarter-final.

Their opponents reached the last four with a 4-2 aggregate win over Porto.