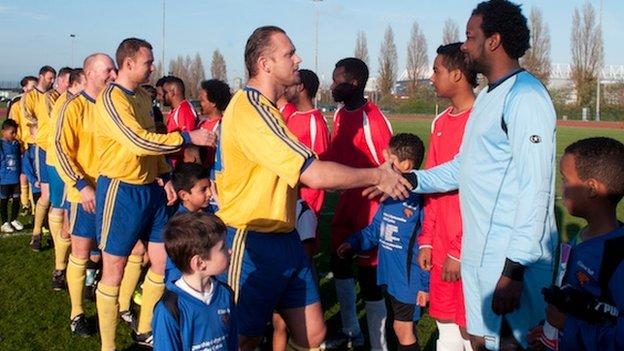 When Abubakr El-Gadi fled persecution in the Darfur region of Sudan 10 years ago he says he was escaping harassment from the police and the military.

A decade on and his experience of the police in his new home in Cardiff is certainly more positive - and it is all because of football.

Mr El-Gadi came to Wales as a refugee just as civil war began to bring the plight of the people of Darfur to the attention of the international community.

And the international language of football is helping to build relations between the Sudanese community in Cardiff and an institution feared by many in their homeland - the police.

We are lacking confidence in the government institutions, so to connect the police with football - our beloved activity - really is very clever

Abubakr El-Gadi is now chairman of the Sudanese Community of Cardiff and South Wales.

He watches on proudly as two football teams stride out from the bowels of the Cardiff International Sports Stadium into the bright spring evening - 11 young men from Cardiff's Sudanese community taking on a not-so-young team assembled by South Wales Police.

"Most of us are refugees and we used to have harassment from the police and the military institutions," said Mr El-Gadi, who was a public prosecutor in the Ministry of Justice before he moved to the UK.

"We are lacking confidence in the government institutions, so to connect the police with football - our beloved activity - really is very clever and we hope that this dialogue will go on."

On an evening where Champions League football was on the television, an enthusiastic crowd chose the Community Cohesion Cup over Europe's premier club football tournament.

Before they even took the field on the night, South Wales Police achieved cohesion between Wales' two rival football cities by including ex-Cardiff City and Swansea City players in the ranks.

Within 15 minutes Trundle had missed a penalty but scored the rebound to put South Wales Police 2-0 up.

The final score was 8-0, no surprise considering the police line-up.

"There's a strong interest in football among police officers and the wider police family and also among the communities we work in and help with every day," added Chief Inspector Howe.

Former Cardiff City defender Brazil was delighted to be playing alongside former Swansea City striker Trundle, rather than against him.

"Football is such a worldwide game and it does break down so many barriers and it's great so many ex-players played for the cause tonight," said Brazil.