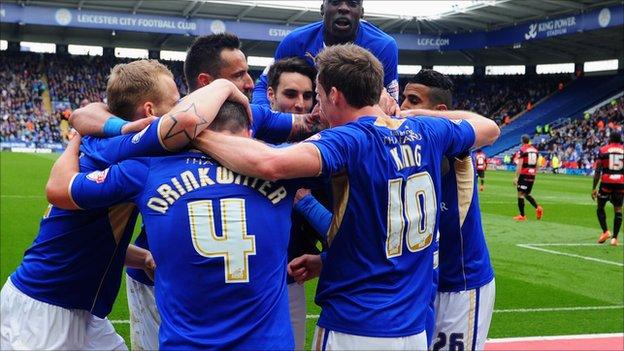 Leicester City moved closer to winning the Championship title as QPR missed the chance to seal a play-off place.

At the other end Andy King had an effort cleared off the line and earlier fired at Green from close range.

The result sees Leicester move onto 93 points with Nigel Pearson's side holding a seven-point advantage over Burnley with three games left. QPR remain fourth but need just a point to seal a play off place.

Harry Redknapp's side had the better of the early chances with Yun and Kranjcar forcing routine saves from Schmeichel.

Kranjcar then saw his close-range effort blocked by the legs of Schmeichel after a goal-mouth scramble before Leicester cleared their lines.

At the other end King had two chances in quick succession to give the hosts the lead.

First he fired a half volley from six yards straight at Green and then, having rounded the QPR keeper, he saw Nedum Onuoha brilliantly clear his effort off the line.

QPR continued to create chances themselves and Modibo Maiga was unlucky to see his effort deflect off Wes Morgan and sail just wide after he had been played in by Kranjcar.

But Leicester eventually broke the deadlock with Nugent scoring his 19th league goal of the season.

The Foxes forward was played in by Daniel Drinkwater and, after outpacing the QPR defence, he fired across Green and into the far corner of the net for 1-0.

QPR'S task was made that much harder when Assou-Ekotto was sent off for a second bookable offence.

But they pressed for the equaliser and Kranjcar's free-kick was deflected wide as Leicester held on for another three points.

Leicester manager Nigel Pearson: "We deserved to win the game and we created more opportunities.

"We are in a good position and I thought this was a very interesting and tactical game between two good sides. But I have not changed my philosophy, we have three games left and we want to win them all.

"I think QPR have a lot of quality players and showed their depth of quality. It was always going to be a tough game for us to win and both games against QPR have been decided by one goal and fittingly each time it was a quality goal."

QPR boss Harry Redknapp: "We still need another result. We are still one result away from doing it - although you never know, do you? We might not have to win another game.

"We might have enough points already, but we don't want to leave that to chance so we are looking for another win.

"I thought we played well and were unfortunate to lose. They are a good side but I thought we were every bit as good as them."