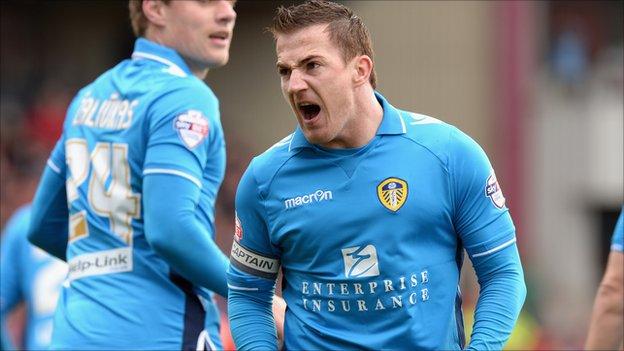 Barnsley's survival hopes suffered a blow as they were beaten by Leeds to leave them three points from safety.

They have three more games to avoid relegation to League One.

Ross McCormack gave the visitors an early lead after Matt Smith's knock-down found him free inside the area and he fired low past Luke Steele for his 29th goal of the season.

Barnsley never seriously threatened to drag themselves back into this Yorkshire derby.

Home keeper Steele was called into action to keep out a header from Smith and Luke Murphy was the next to threaten for Leeds, as he saw a header blocked.

Leeds defended their lead well during the opening 45 minutes, restricting Barnsley to a solitary effort on goal - a looping header from Dale Jennings that was easily gathered by keeper Jack Butland.

Early in the second half, another tame Jennings effort was easily saved by Butland and team-mate Kelvin Etuhu then saw his shot blocked before putting the follow-up well wide.

As the visitors began to press forward in search of a second goal, Smith found the target with a header from Tom Lees' free-kick but could only direct it straight at Steele.

For Barnsley, Jennings saw another header saved by Butland and Liam Lawrence put a 25-yard effort over the bar.

But Noel Hunt threatened to find a way through at the other end before being blocked by Jean-Yves M'voto and it was Leeds who looked the likelier scorers in stoppage time - McCormack firing a low drive wide of Steele's left-hand post.

Barnsley manager Danny Wilson: "It wasn't a good result, obviously, and it doesn't make it any easier, but who said it was going to be easy anyway?

"We thought it was going to go right to the wire and I think I'm right. We didn't offer enough quality and I thought the game was poor.

"There were not a lot of chances and there was one bit of quality. Of all the people for it to fall to, it was McCormack and you didn't want it falling to him with the form that he's in at the moment. That was the difference."

"I think the game was separated by a bit of real quality. Ross's first touch was fabulous and then a great finish.

"He's a match winner and those players are very, very important. He took the one chance that made the difference. He's right up there as a finisher."