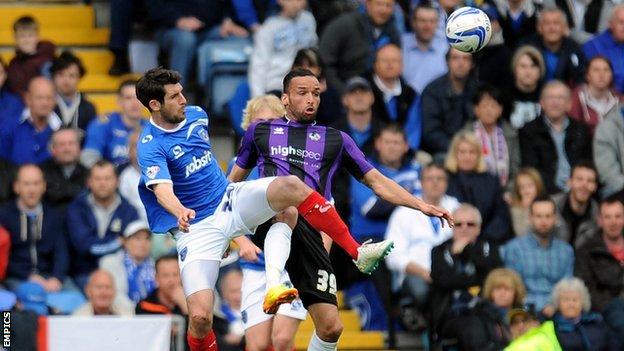 Portsmouth moved closer to safety with a crucial win against struggling Bristol Rovers.

Wes Fogden snatched a winner on 70 minutes with his close-range strike.

Bristol Rovers, who are just one place above the League Two relegation zone, travel to third-placed Rochdale on Monday night.

"That was probably our biggest test since I came in. Fair play to Bristol Rovers, they gave us one heck of a game.

"I asked the lads at half time to show some character. I said 'this is the biggest test that we've had, can you go and stand up to it and be counted?'

"I asked the players to put a bit of pride back in the shirt and I think they did.

"We were a little bit unlucky with the injuries. It changed the complexion a bit.

"We were disappointed with the goals we conceded but we got our pride back after last week's woeful performance.

"It was about getting the fans back onside. We wanted to win the match but it wasn't to be."

Shots on Target
Home8
Away9