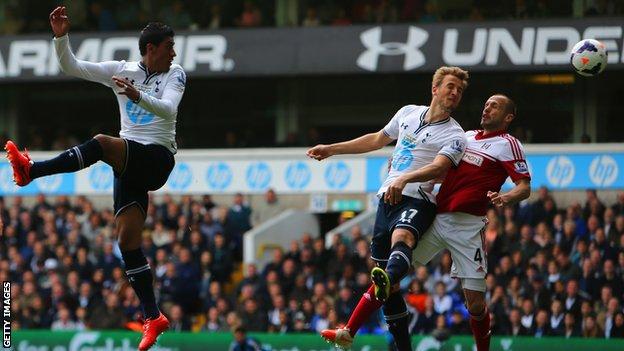 Spurs went ahead when Paulinho tapped in Christian Eriksen's free-kick but Steve Sidwell pounced on an Ezekiel Fryers error to steer in a leveller.

Younes Kaboul sidefooted in another Eriksen free-kick to extend the lead before Sidwell had a penalty saved.

The visitors were awarded the spot-kick for an Eriksen handball after Hugo Rodallega tried to play the ball past him but, although Sidwell's effort was well-struck, it was too close to keeper Hugo Lloris, who fended the ball away.

Defeat ended a two-game winning run for the Cottagers which had revived their survival hopes.

They remain two points adrift of 17th-placed Norwich, who play Liverpool on Sunday, with games against Hull, Stoke and Crystal Palace remaining.

Tottenham stay sixth and, while they retain a mathematical chance of finishing fourth, their best hope of European football appears to be a Europa League place.

The hosts were the better side but having let in three early goals last week at West Brom they were almost caught out again by Fulham.

A long John Arne Riise ball forward released Rodallega but the Colombian, with two centre-backs chasing him down, opted for a first-time shot that went well wide.

The chance epitomised an urgency being shown by the visitors, although they survived a scare of their own when Kane nodded the ball across for Kaboul to head over from six yards after Fulham failed to clear a corner.

Lloris had to rush out of his goal to save a shot by Rodallega before a far-post volley from Aaron Lennon at the other end was touched on to the post by keeper David Stockdale.

Tottenham increased the pressure on the visiting goal as the game progressed and were rewarded when Eriksen's pacy and dipping free-kick was tapped in by an unmarked Paulinho.

Almost immediately, though, Fulham equalised. Stand-in Spurs centre-back Fryers inadvertently played a one-two with Sidwell, who kept his balance and composure before steering a shot past Lloris.

The visitors failed to keep up their level of performance after the break, however, and found themselves behind again when Lennon's cross was glanced in by Kane.

Rodallega had a powerful header tipped over the bar by Lloris but Fulham's threat was sporadic at best in the second half.

The quality of Tottenham's crosses, in particular from Eriksen, was a constant threat and they again benefited when the Denmark international delivered a dangerous free-kick and Kaboul sidefooted in from close range.

Fulham have now conceded 31 goals from set-pieces this season - the most in the Premier League - and their misery was compounded with Sidwell's penalty miss.