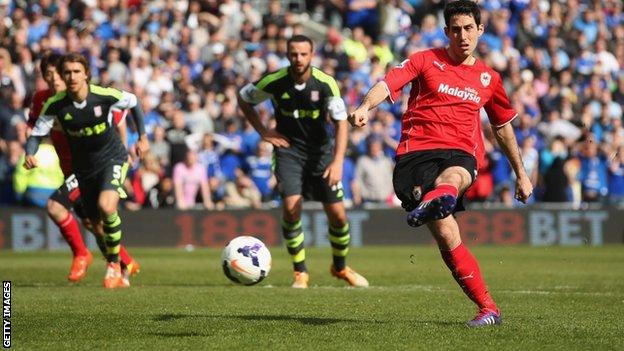 Cardiff claimed what could yet prove a vital point in their fight against Premier League relegation as they fought back against visitors Stoke.

Peter Whittingham levelled from the spot in the second half after Steven Nzonzi's trip on Fraizer Campbell.

Cardiff's Juan Cala had a header disallowed for offside before Stoke's Jonathan Walters struck the bar.

Cardiff's unexpected win at Southampton last week had given Ole Gunnar Solskjaer's side renewed hope that an unlikely escape might still be on.

The Welsh side might have hoped to spend their week focusing on the visit of Stoke, but instead it was dominated by claims that their line-up had been leaked to Crystal Palace the day before the south Londoners inflicted a damaging 3-0 defeat on Cardiff.

The noise from the Bluebirds camp, however, was that the controversy had brought the squad closer together as they sought a victory that would increase the pressure on 17th-placed Norwich, who play title-chasing Liverpool on Sunday.

One early boost was the news that relegation rivals Fulham had lost at Tottenham in Saturday's early kick-off.

But Cardiff, unchanged from their St Mary's triumph, still needed to overcome a Stoke side they had failed to beat in seven previous meetings.

The Potters arrived in good form, having won five of their previous seven games and evidently flourishing under the management of Mark Hughes.

While the Welshman's side are well clear of the relegation tussle and out of the fight for European places, the visitors still had the carrot of needing five more points to record their highest Premier League total.

Cardiff applied the early pressure and Jordan Mutch should perhaps have done better with his first sight of goal but fired straight at Asmir Begovic.

But Stoke bided their time and nearly caught Cardiff on the break, as Stephen Ireland drove upfield before slipping the ball right for Odemwingie. The former Cardiff striker's shot was parried by David Marshall.

Begovic also had to pull off an equally impressive save, stretching to palm Whittingham's free-kick onto his near post after Campbell had been brought down.

But having gone close to taking the lead, the hosts then conceded a penalty as the half ticked down.

Odemwingie latched onto a loose ball at the edge of the Cardiff area, but with his back to goal there seemed no immediate danger until Kim nudged into his back.

Referee Howard Webb took a long look before awarding the spot kick, which Arnautovic sent low and hard into the middle of the net.

Undaunted, Cardiff stormed out for the second half and fashioned an equaliser within six minutes of the restart with a penalty of their own.

Again the contact was minimal but Campbell just got a toe to the ball ahead of N'Zonzi and Whittingham held his nerve with the spot kick - incredibly Cardiff's first of the season.

With Cardiff's confidence up, only a combination of Begovic's reflexes, the post and an off-side flag prevented Steven Caulker and then Cala from putting the hosts ahead in an action-packed spell.

But as they pressed for a priceless winner they were always at risk from Stoke catching them on the break and Marshall had to come to the Bluebirds' rescue again, as he reacted smartly to deny first Odemwingie and then Oussama Assaidi.

When the Scotland goalkeeper was finally beaten, the woodwork came to Cardiff's rescue as Walters' dipping shot pinged off the crossbar.

Cardiff's fate now looks likely to be decided in the North East, with away games against Sunderland and Newcastle to come before a final-day visit from title-chasing Chelsea.

Stoke City manager Mark Hughes: "The neutrals in the ground would think they were a couple of soft penalties. I am not going to surprise you by saying I thought ours was a valid penalty and rightly given.

"In the second half we were in the ascendancy from Assaidi, which if we had converted that chance it would have won the game for us. But we will take the point."