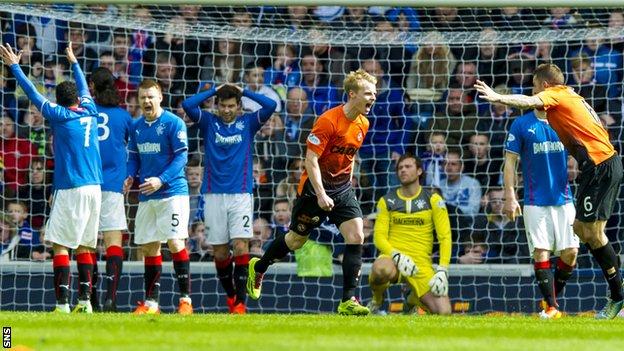 BBC Scotland pundits Billy Dodds, who played for both sides, and Willie Miller, whose former team Aberdeen face St Johnstone in Sunday's semi-final, give their marks out of 10 for the sides.

He made a horrendous howler for Dundee United's third goal. You could see he had not been playing for a while. A bad day at the office for him.

Worked hard enough but his distribution could have been better. A steady enough performance.

Nobody can doubt his commitment but he was so erratic. His passing was poor and he gave away possession at times.

United worked on his lack of pace. He was solid but was unable to have an influence on the game.

Got Rangers back into the game with his goal and had a couple of other efforts. Another who did his job.

Poor first half, decent second half. Worked away and tried to get forward.

Night and day from last week's performance in the Ramsdens Cup final defeat. Tried to overdo it last week, but this week he kept it simple. He got back to doing what he is good at, although he was fortunate not to be booked for a bad challenge in the first half.

Still a shadow of the player he was at Motherwell. Battled away and looked dangerous fleetingly but could not influence the game enough.

Started really well and put some dangerous balls in the box. Good performance in the first half but he tired.

Missed the best opportunity before Rangers went behind. It could have been a whole different game if he had put it away.

Certainly gave United problems in the air but did not possess enough of a goal threat. Did what he could.

Not enough time to have an impact. Could have done better at times.

He was nervous in the first-half, and was at fault for Rangers goal. However, he did well to save Steven Smith's deflected free-kick in the second half.

I expected him to be more in Rangers' half, but he did not get far enough forward.

He struggled in the first half with Jon Daly, but recovered after the interval.

Similar to Souttar in that he found Daly hard to handle, though he did cope a bit better than his partner. Was influential in the opening goal, with his header releasing Stuart Armstrong.

I thought he did well going forward, but I have seen him play a lot better. Arnold Peralta kept him well occupied.

I think both of them together are usually very strong, but they were outplayed and outmuscled by the Rangers midfield. They were closed down very quickly, and were not hugely influential.

He had one piece of magic at the second goal, but was largely anonymous.

He had a couple of glimpses, and obviously he scored the second goal, but was another who was not at his best.

He was probably Dundee United's most effective player. He was not on top of his game but was the best of the midfield.

He scored the goal but did not have much to do. No service of note. Maybe could have been sharper with a couple of opportunities.

He did well when he came on. He competed well in the air and put in some great crosses.

The attacker came on at a time when Dundee United were trying to shut up shop. He is stronger than Gauld so was able to hold the ball up a bit better.

Not enough time to make a major influence, but did a job in the closing stages.

Billy Dodds and Willie Miller were speaking to Andy Campbell and Andrew Southwick.