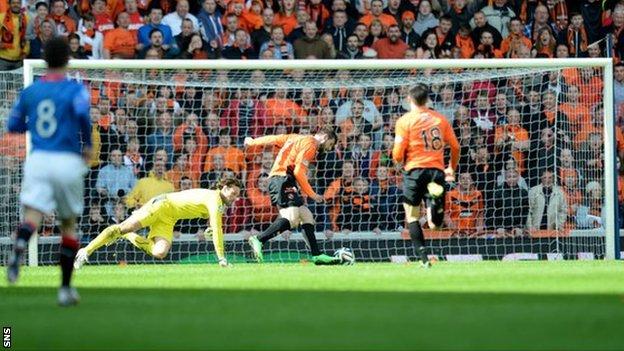 Slackness in the Ibrox defence allowed United to go two up in the semi-final.

And, after Rangers had pulled a goal back, goalkeeper Steve Simonsen was at fault for the Tangerines' late third.

"It would be unfair and wrong of the me to single anyone out for errors," said McCoist. "We missed chances and we gifted one or two goals."

Stuart Armstrong put United ahead before Richard Foster's failure to clear led to Gary Mackay-Steven's deflected second for the Taysiders.

Rangers had started strongly and Steven Smith's free-kick made it 2-1 and revived their hopes before the interval.

However, Nadir Ciftci capitalised on Simonsen's carelessness to run in the clinching goal and ensure consecutive defeats for the Glasgow side following last week's Ramsdens Cup final loss against Raith Rovers.

"I didn't speak to anyone individually," McCoist said of his post-match team talk. "I spoke to all the boys. Every one of them is disappointed. You win and lose as a team, although of course they were individual errors.

"I thought we were the better team for the majority of the game but poor decisions cost us. I thought we slit our own throat with the goals we lost and our level of finishing wasn't what it should be.

"We couldn't have asked for better chances. We even had a chance in the first two minutes with Bilel [Mohsni], but if you don't take your chances, you run the risk, especially with the way we defended for the goals."

With the Scottish League One champions on their way to the Championship next season, McCoist admits his side have "a long, long way to go" if they are to eventually challenge top-flight teams such as Dundee United.

"It has just confirmed what we have always thought," he added. "I thought we had a side of top-flight ability and that was possibly shown to be the case today.

"The last two defeats confirmed what we need to do and add to the squad.

"I think we are better than we were 14 months ago, but we need to be better again next year. We need to keep improving."