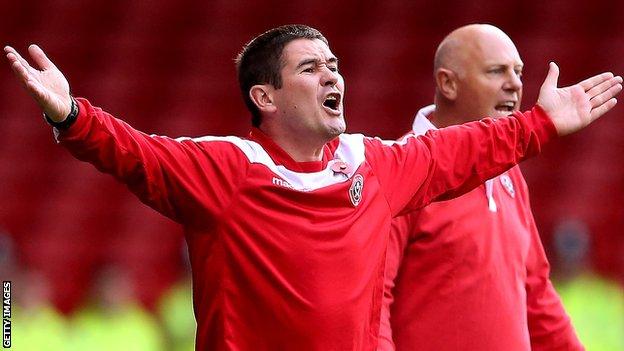 The League One Blades have sold their full 32,000 ticket allocation, but 5,000 Hull tickets remain unsold.

Clough, 48, said: "We've heard a few stories that the Hull supporters are saving themselves for the final.

"It might be a risk. Any little thing we can use like that, we'll use because we need everything on our side."

United will become the first team from outside the top two divisions to reach the FA Cup final since Southampton in 1902 if they can add Hull's scalp to that of the Tigers' Premier League rivals Aston Villa and Fulham.

After victories over Colchester United and Cambridge United in the first two rounds, they have also upset Championship teams Nottingham Forest and Charlton on their road to Wembley.

Clough, a beaten finalist as a Nottingham Forest player in 1991, said: "I think playing a Premier League team makes us big underdogs.

"But somebody told me we have more players who have played at Wembley than they have."

The former England international believes it would be an "incredible achievement" if his side reach the final.

He added: "We can go down and relax to a certain degree, but without this silly 'we're going for a nice day out' nonsense - we're still going to try to win the game."

The Blades have lost their past four FA Cup semi-finals, and were beaten by Huddersfield Town in a penalty shoot-out in the League One play-off final at Wembley two years ago.

"We've been made aware of that record and we are totally disregarding it," said Clough. "I don't think it will have too much bearing come Sunday."