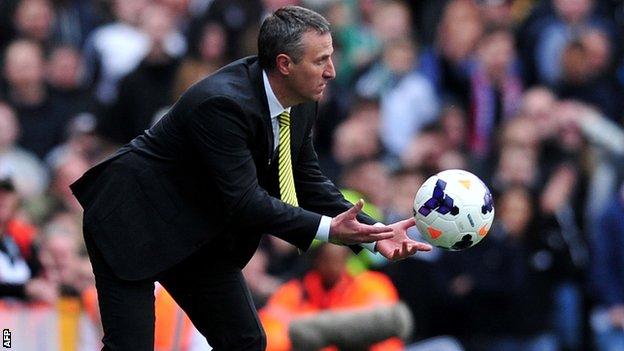 Norwich manager Neil Adams has admitted the Canaries are fighting for their Premier League lives.

They went down 1-0 at Fulham on Saturday, with Hugo Rodallega scoring the only goal just before half-time.

The Carrow Road side are now just two points above the drop zone, and facing a difficult final four fixtures.

"We are in it, without a doubt," said Adams. "We are perilously close. We can't hide away from it. Thirty-two points won't be enough."

His side are now just two points clear of Fulham, and three ahead of Cardiff, with games against Liverpool, Manchester United, Chelsea and Arsenal to come in the closing weeks of the campaign.

"We've got four huge games against four of the best teams in Europe, not just in England," said Adams.

The new manager was left to reflect on the period just before the decisive goal, when Fulham goalkeeper David Stockdale produced superb saves to deny Ricky van Wolfswinkel and Leroy Fer and Robert Snodgrass struck a free-kick against the bar.

It means Van Wolfswinkel, one of six changes Adams made in his first game since replacing Chris Hughton as boss last Sunday, has still not scored since the opening day of the season.

"Obviously Ricky needs a goal," Adams said of the £8.5m signing from Sporting Lisbon. "He's come with a hefty price tag and he works his socks off - he gives you everything you want in a centre-forward but, of course, they're paid to score goals.

"If he gets one I think he'll go on a run, but it just doesn't seem to come for him at the moment."

Fulham have now won three of their last five matches under Felix Magath and have given themselves a real chance of getting out of trouble.

Not that the German was particularly impressed at his side's latest effort.

"I am happy with the win but today I am not so satisfied," he said. "We have to respect Norwich were the better team but we had a very good goalkeeper who saved us from defeat."