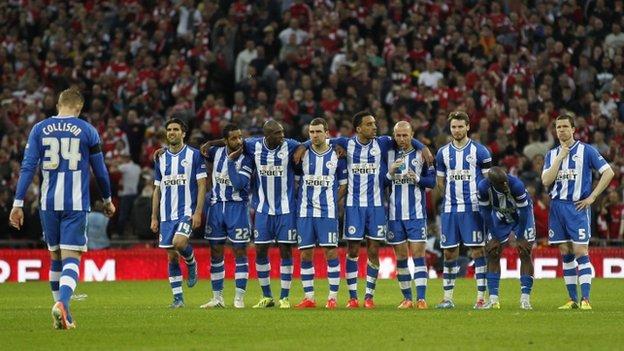 Uwe Rosler has vowed to start practising penalties if Wigan book a return to Wembley in the Championship play-off final next month.

Rosler suffered the agony of watching his team lose their FA Cup semi-final with Arsenal on spot-kicks.

"I was asked 'have you practised penalties?' said Rosler. "I said, 'I am German, I don't need to'.

"Everybody tells us the amount of games is bound to have an effect. But we are stubborn.

"We want to be back here in May. When we are back, then we will practise penalties."

Despite once again being huge underdogs, the holders got their noses in front when Jordi Gomez slotted home a second-half penalty.

Per Mertesacker levelled eight minutes from time and, after a scoreless period of extra-time, Wigan went down 4-2 in the shoot-out, with captain Gary Caldwell the first man to miss on his debut appearance of the season after hip surgery.

"Gary was ready, I thought he would score," said Rosler. "Unfortunately he didn't. But he is a leader and he will recover."

Jack Collison also failed on what was Wigan's 55th game of a marathon season, with five league games still to to navigate.

Currently in fifth spot, what was a nine-point buffer to seventh has now been cut to just three, with fellow promotion hopefuls Reading and Burnley to face over the Easter period.

"Everybody tells us the amount of games is bound to have an effect," said Rosler.

"But we are stubborn. We will try to prove everyone wrong and the players showed today what mental strength they have."