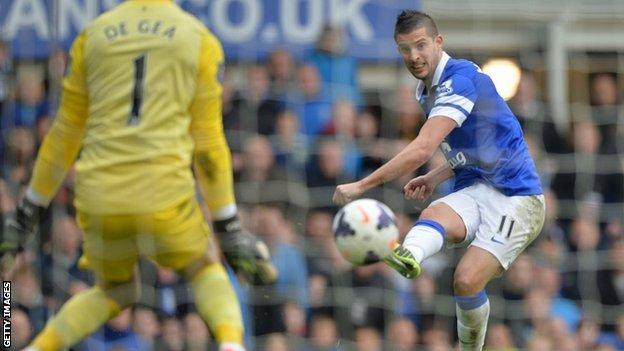 Everton made it a miserable return to Goodison Park for former manager David Moyes as they beat Manchester United with ease to maintain their Champions League aspirations.

Moyes, who left Everton last summer after 11 years to succeed Sir Alex Ferguson at Old Trafford, was given a rough reception off the pitch and he was offered nothing on it to improve his mood.

And to add to his discontent, Everton demonstrated their progress under his successor Roberto Martinez.

By doing the double over the champions for the first time since 1969, this was an impressive response by Everton to the midweek setback of losing at home to Crystal Palace.

Leighton Baines - a summer transfer target for Moyes before he signed a new long-term deal to stay at Goodison Park - set them on their way with a penalty and Kevin Mirallas added a second before half-time.

Everton, and Steven Naismith in particular, could have added further goals in a win that leaves them only one point behind Arsenal, who earlier on Sunday cruised to victory at Hull, in fifth place.

Moyes was taunted throughout by the home fans and this was a game that illustrated graphically just how far United, who now lie 12 points adrift of the Toffeemen, have fallen this season.

The final whistle was greeted ecstatically at a raucous Goodison and will have Martinez still believing his side can finish off an excellent season with a place in next season's Champions League.

Moyes was greeted with some hostility when he left the United team coach - and his appearance on Goodison Park's big screens and in his technical area brought a loud burst of jeering.

United were seeing plenty of the ball but Everton were much more dangerous, with the normally reliable Naismith unusually wasteful when he shot well over the top from Romelu Lukaku's knockdown.

Everton were angry when a penalty appeal was rejected as Jonny Evans appeared to block Naismith's shot with his hand - but referee Mark Clattenburg had no hesitation when the stumbling Jones clearly handled Lukaku's goalbound shot.

Everton emphasised their superiority two minutes before the interval when they doubled their lead following a sweeping counter attack. The outstanding Seamus Coleman had been causing United no end of problems and his pass found Mirallas, played onside by Alex Buttner, to beat De Gea with an angled finish.

Martinez was forced into a change at half time as the injured Sylvain Distin was replaced by Antolin Alcaraz but United still struggled to make any impression and Moyes made a double change on the hour, sending on Antonio Valencia and Javier Hernandez for Evans and Nani.

Everton were coping with United in comfort and looked the more likely side to add a third with Naismith sliding a finish over the top from Mirallas's cross then bringing a fine low save from De Gea from the edge of the area.

Tim Howard had barely been troubled but he was required in the closing moments to block at feet of Wayne Roney after substitute Leon Osman had conceded possession.

It was a rare moment of anxiety at the end of a very comfortable afternoon for Everton - and an abject one for Moyes - as the Toffees moved back to within one point of Arsenal with three games remaining.