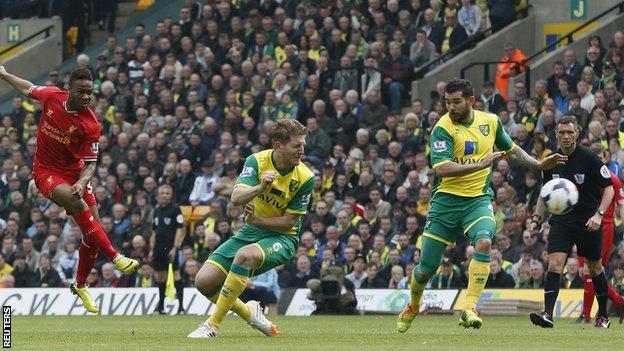 Liverpool opened up a five-point lead at the top of the Premier League after a hard-fought win at Norwich.

Second-placed Chelsea had lost on Saturday and the Reds capitalised, with Raheem Sterling arrowing in a long-range shot to put them ahead.

Luis Suarez guided in a second only for Gary Hooper to slot in for Norwich after keeper Simon Mignolet's error.

Sterling scored with a deflected shot before a Robert Snodgrass header gave the Canaries hope but the Reds held on.

It was a frantic finish at a boisterous Carrow Road and the home side almost salvaged a point only for Mignolet to save a Ricky van Wolfswinkel header.

Liverpool were given a scare by Norwich but managed to secure an 11th successive league win, which confirms their place in next season's Champions League, ahead of next Sunday's home game against Chelsea, a visit to Crystal Palace and a meeting with Newcastle at Anfield.

Chelsea's surprise defeat at home to Sunderland on Saturday had added to the expectancy surrounding the Reds at Carrow Road.

But following a storming start, they had to determinedly drag themselves over the line to earn a victory which brings closer a first title since 1990.

Norwich suffered a sixth defeat in eight outings, although they can take heart from a battling display. They are two points above the relegation zone with games at Manchester United and Chelsea to come before they play Arsenal at home.

"What a battle and what a performance from Neil Adams's Norwich side. They were magnificent in the second half and they pushed Liverpool all the way."

The Canaries ultimately paid the price for a disappointing first half, which began with Sterling sidestepping Bradley Johnson and powering a 22-yard shot, which took a slight deflection off defender Michael Turner, past keeper John Ruddy.

Joe Allen had an angled drive fended away by Ruddy as Liverpool made a typically energetic start, with a second goal not taking long to arrive.

Sterling turned from scorer to provider as he bent a low right-wing ball into the path of Suarez, who guided a sidefoot home for his 30th league goal of the campaign.

Norwich rallied and striker Hooper latched on to a Turner knockdown but was denied the chance to get a shot away courtesy of two tigerish Allen tackles.

A swerving long range Nathan Redmond effort was also palmed away by Mignolet, with Norwich continuing to the apply the pressure after the break.

The home side received their reward for their efforts when Mignolet mistimed his attempt to punch away Steven Whittaker's cross and Hooper tapped in from eight yards.

Suarez could have eased Liverpool's nerves but sent a shot from just inside the box narrowly wide.

It was left to Sterling to restore the visiting side's two-goal advantage, with the Reds forward racing at the Norwich defence before his effort looped in following a deflection off Bradley Johnson.

The Canaries refused to be disheartened and Snodgrass had a shot palmed around the post, while a Redmond strike was diverted wide off the head of defender Martin Skrtel.

The home pressure eventually told again when Snodgrass headed in - but despite going close with Van Wolfswinkel's header, an equaliser eluded them.