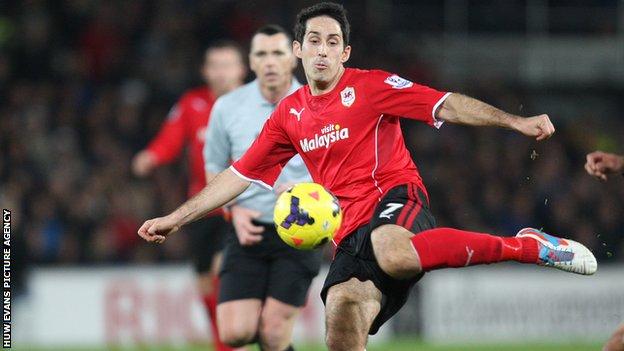 Peter Whittingham says Cardiff City's 1-0 win at Southampton has given them renewed belief they can avoid relegation from the Premier League.

The win left Cardiff three points from possible safety in 19th with four games to go.

"It's huge for our confidence," said midfielder Whittingham.

Captain Steven Caulker agreed, saying: "Four more wins - it's going to be a tough ask - but we're quietly confident we can do it [stay up]."

Cardiff's victory at Southampton was the first time in nine matches that they have kept a clean sheet.

Their last was in the 0-0 draw at home against Aston Villa in February.

In between those games, the Bluebirds conceded 22 goals.

Whittingham added: "It's up to us now. We've got an OK run-in so it's about what we do now."

The win was a bright end to a turbulent week for Cardiff, after losing 3-0 at home to Crystal Palace on 5 April, compounded by claims their team was leaked to the London club ahead of the match.

The Welsh club are understood to be taking disciplinary action against two employees over the matter, although Palace manager Tony Pulis played down the controversy.

Cardiff's next match is against 10th-placed Stoke City on Saturday, 19 April.

Whittingham says victory would help the Bluebirds put pressure on the teams above them.

"You get another three points against Stoke and then everyone's starting to look behind them," said Whittingham.

"Even more so after the win against Southampton. We need to take each game as it comes.

"It's going to be a hard game again [against Stoke] but if we get three points again then you never know."

Caulker was particularly pleased to be part of a defensive effort that defied Cardiff's tendency to concede late goals and that rearguard partner Cala scored the winner.

"I was delighted for him [Cala]. He's come in and performed really well, as has [goalkeeper David] Marshall - he kept us in the game several times... [as he has done] several times this season," said Caulker.

"It took a bit of magic from Juan to get the goal.

"I was very pleased that we showed a lot of character at the end, with the stats flying around how many we conceded late on, to see the game out with a clean sheet.

"Southampton are a great side, especially attacking-wise and we were pleased to get the clean sheet, but it means nothing if we don't go and do the same next week."