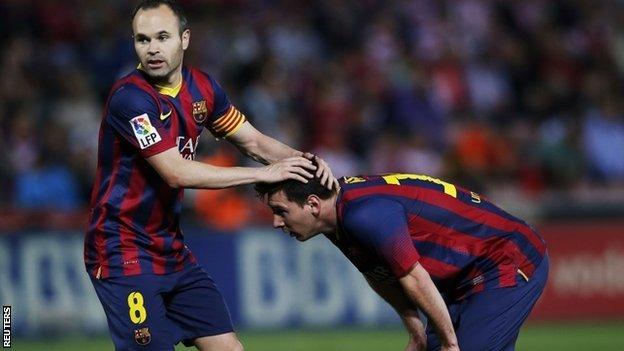 Barcelona are mentally "screwed up" according to defender Martin Montoya, while Andres Iniesta says the side have gone backwards after another defeat.

Barca, out of the Champions League, are fighting to save their season after Saturday's loss at lowly Granada left the title race out of their hands.

They could end the season with no silverware if they lose the Copa del Rey final to Real Madrid on Wednesday.

"It hurts to take this backward step at this point," said midfielder Iniesta.

Barca started the month in the hunt for three trophies but two successive defeats have increased the pressure on Gerardo Martino, who was only named Barcelona boss in the summer.

The Argentine saw his side lose 2-1 on aggregate to La Liga rivals Atletico Madrid in the Champions League quarter-finals last Wednesday, ending hopes of a second European triumph in three years.

And their setback at struggling Granada has left them trailing Real Madrid and Atletico in the race for the league title.

They face Real in the Spanish cup final on 16 April but Montoya admits the last few days have taken a toll on the team.

"We will fight for the league until the end, we still have games left and hopefully our rivals will lose points."

Iniesta, a three-time Champions League winner with Barca, said too many mistakes are threatening to ruin the season.

"We made a mistake in the play that led to their goal and that really hurt us," said the 29-year-old after Barca's first La Liga defeat by Granada.

"Sometimes it's hard to find an explanation, we did everything we could to score."

The last time Barcelona went through a season without winning a major honour was in 2007-08 when they finished third in the table, lost to Manchester United in the Champions League semi-final and were beaten by Valencia in the Copa del Rey semi-final.