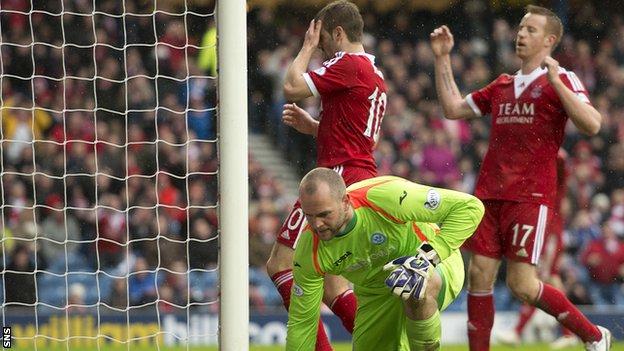 "We had chances to get that second goal and that's where we'll be kicking ourselves," said McInnes.

"I've got to applaud St Johnstone's determination and tenacity to make it their day."

McInnes said Barry Robson, McGinn and Peter Pawlett all had chances to give the Dons a further cushion after taking the lead.

"We scored a very good goal and I felt that, for 10 minutes after we got the goal, we had a bit of assurance about us," said the Aberdeen boss.

"But then they came back into it and we knew at half-time there was still work to be done.

"I don't think we quite got to grips with the game in the second half and didn't have any real control."

McInnes suggested there was a foul in the build-up to St Johnstone's equaliser, claiming that James Dunne's foot was high in a challenge with Shaleum Logan, but admits any such complaints would be "nit-picking".

"They got their tails up after the first goal and nobody can deny that St Johnstone were determined enough to make it their day.

"We were culpable in not doing more with our chances. A lot was spoken about how clinical we were in the [League Cup] semi-final against St Johnstone but that wasn't the case today.

"When we broke, we were quite incisive at times; now we're licking our wounds and scratching our heads. I've got enough belief in the players that we'll have opportunities like we had today to come round again.

"We were fighting on all three fronts and it's now down to two. There's no shame in losing to St Johnstone, they're a good side. We wanted to get the club into a final again and it's a sore one to take."