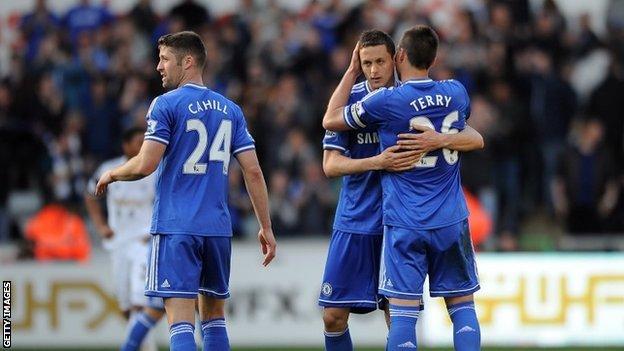 Demba Ba's goal gave Chelsea a 1-0 win at Swansea, who were reduced to 10 men after defender Chico Flores was sent off in the first half.

It keeps second-placed Chelsea two points behind leaders Liverpool, who had earlier beaten City 3-2 at Anfield.

"We obviously knew about the Liverpool result and it's probably the one we wanted," Terry told Sky Sports.

The Blues, who still have to visit Anfield on 27 April, are five points ahead of third-placed Manchester City, although Manuel Pellegrini's side have played two fewer games.

Centre-back Terry suggested that, because of City's games in hand, a Liverpool victory at Anfield in Sunday's early kick-off was better for Jose Mourinho's Chelsea.

He said: "We've won our game and the pressure is still on the teams above and below us. We knew we would make it very easy for them if didn't win our games, regardless of the result at Anfield.

"Patience was the key, especially after they had their man sent off not long into the game. Sometimes we weren't patient or at our best but we got the three points."

Swansea interim manager Garry Monk was unhappy with the way in which referee Phil Dowd handled the sending-off of Flores, who was dismissed in the 16th minute after being booked twice within 120 seconds.

Monk claimed that Dowd was not going to show the defender a second yellow card for fouling Andre Schurrle until Chelsea's players and management protested.

Asked what he had said to Dowd, Terry replied: "I just said 'that's a second yellow'. Fair play to Phil. It was a big decision to make and he made the right one.

"I'm speaking as a Chelsea player, but I think everyone would say it was a second yellow. If it takes a minute, two or five minutes to make the decision and it's a yellow, it doesn't matter."