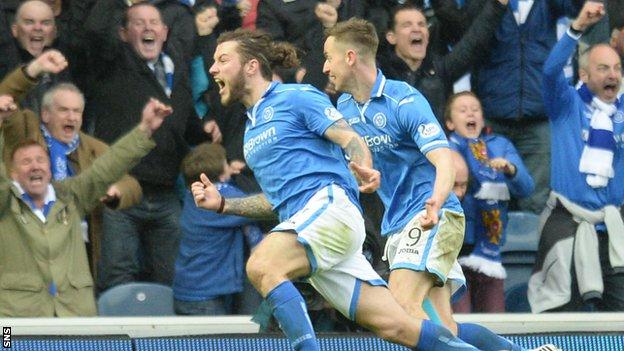 The moment, in all of its raw emotion, did not solely belong to Stevie May.

As he hauled off his shirt and ran towards the St Johnstone supporters to celebrate what seemed inevitable to be the winning goal at Ibrox, other individuals deserved to be hailed.

May hogged the limelight but not the appreciation, as the contributions of the likes of Steven MacLean and Michael O'Halloran were just as significant to St Johnstone's historic achievement.

One part of Ibrox reverberated to a glorious, emotional outburst of relief and acclaim. This victory was built first on apprehension, then on a realisation that St Johnstone could prevail.

They fell behind, then found the means to fight back in the second-half, and the 2-1 victory that carried them into next month's Scottish Cup final against Dundee United - the first in their 130-year history - was a reward for tenacity as much as May's decisiveness in front of goal.

The 21-year-old struck twice to reduce Aberdeen to a rare moment of regret during a season in which the club's supporters have dared to embrace a sense of ambition once again.

May's efforts, in the 61st and 84th minutes, were flourishes but St Johnstone had been able to rely on the selfless running and link-up play of MacLean, who led the team with heartfelt determination in the period when Aberdeen threatened to establish a commanding lead, and O'Halloran.

The latter, with his swift and direct running, offered an outlet that enabled St Johnstone to regroup when their defence was under pressure.

Dave Mackay and Brian Easton were solid at full-back, too, but it was a reflection of the differing approaches that Aberdeen tended to sling their two full-backs forward to support the attacks while St Johnstone held theirs back.

It took a half-time change in shape and mentality for the Perth side to rescue this semi-final, but also remind their opponents that victory and progress cannot be taken for granted.

A cautious initial period had given way to a spell of Aberdeen dominance. They opened the scoring when Peter Pawlett showed sharp awareness and delicacy of touch to bisect the St Johnstone defence and send Niall McGinn through on goal.

The forward was composed enough to carefully place his shot beyond the reach of Alan Mannus, the St Johnstone goalkeeper.

There were further opportunities, not least because Pawlett, McGinn, Barry Robson and even, surging forward from a deeper position, Ryan Jack were all prepared to commit to breaking from midfield to support Adam Rooney up front.

In the opening half, Aberdeen's play in the final third was more fluid, more penetrative, and more natural; it held the confident assurance of a group of players trusting in their tactics and their ability to be incisive.

At one stage, Pawlett dropped back from his attacking midfield role to gather possession, so Jack sprinted upfield towards Rooney and almost created a chance for the striker. St Johnstone's two-man midfield of Chris Millar and James Dunne were more static.

Aberdeen should have scored a second when McGinn's crossfield pass sent Rooney through on goal, but Mannus blocked. Moments later, the Aberdeen goalkeeper Jamie Langfield had to do the same when May found some rare space in the penalty area.

That ought to have been a reminder to Derek McInnes that the one-goal lead was not enough to rely on, even if his side had been the more adroit performers. The Aberdeen support must have recognised the same vulnerability, because they did not find their voice quite so compellingly in the second-half.

By then, St Johnstone had regrouped, and Wright had shown a willingness to recognise and address the mistakes made in setting his team out by changing the shape to 4-3-3, moving May to the left flank and David Wotherspoon into central midfield.

Aberdeen could not adjust to the renewed challenge, although McGinn, Robson and Pawlett will all regret missed opportunities over the course of the second half. 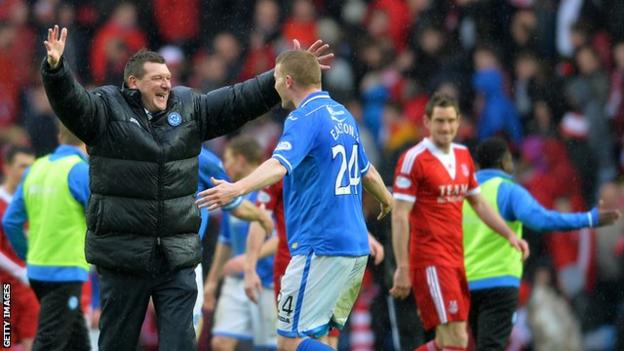 Aberdeen might have expected to overcome St Johnstone, since they did so emphatically in the League Cup semi-final and had not even conceded a goal against them in three league matches. Yet for all that McInnes is emphasising his status as a manager of growing impressiveness, his side fell short at a vital point in the season.

The Aberdeen fans had been goading May, but he suddenly, vitally, found a way to impose himself on the game.

First there was alertness and clinical finishing inside the penalty area, then with six minutes left, when teams tend to allow caution to exert itself, May burst upfield, exchanged passes with the ever-willing MacLean and prodded a shot past Langfield.

St Johnstone have contested two League Cup finals in the past, but have never won a trophy. Now they will face Dundee United in a Scottish Cup final with a renewed sense of purpose.

It has already been a season for Aberdeen to cherish, and it might yet become something similarly precious and commemorative for St Johnstone.

They have earned the right to dream, because when they were one goal down and heading for another semi-final failure, they refused to accept their fate.