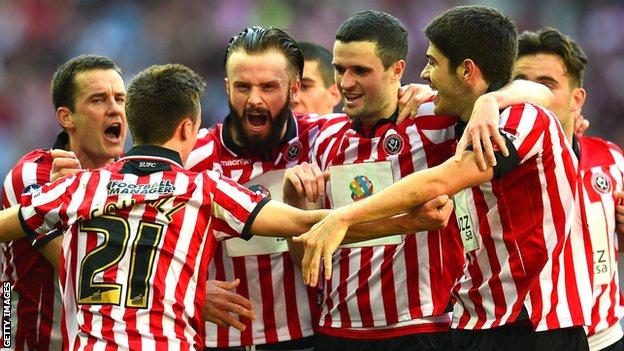 The League One side twice led their Premier League opponents on Sunday, before Hull took control in the second half and won 5-3.

"You can either take this result as a downer or take it as you want to come back and get success," said Clough.

"We want to keep the form and feel good atmosphere around the place."

After flirting with relegation to League Two earlier this season, United have improved significantly since the start of February.

The Bramall Lane side have won nine successive games in all competitions and have overcome Nottingham Forest and Fulham in the FA Cup.

It looked as though they would continue their giant-killing exploits against Hull but a goal by substitute Matt Fryatt just after the break allowed Steve Bruce's side to seize the initiative.

The top-flight side then took command through further efforts by Tom Huddlestone, Stephen Quinn and David Meyler, with Jamie Murphy netting a third for United in stoppage time.

"The second goal just after half-time was the killer for us," Clough conceded. "They were rejuvenated and then scored another after that pretty quickly.

"We are proud of the supporters, hopefully they are proud of us. There was just that tinge, that feeling that we could have done it today.

"But we are halfway up League One and played in the semi-final of the FA Cup against a Premier League side and we must put that into perspective."