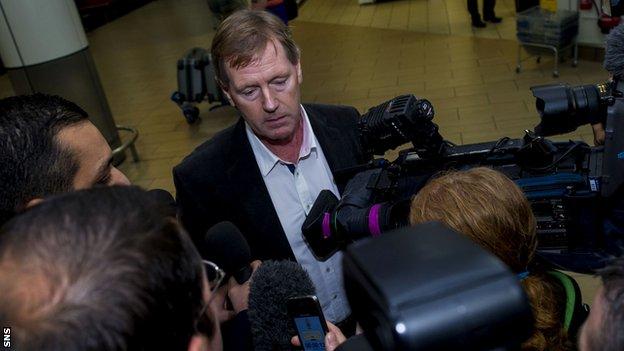 Dave King has accused the Rangers board of attacking his integrity and has again called on supporters to not renew their season tickets.

The former director also rejected the current board's accusation that he made "untrue allegations" last week.

King believes that the directors have gone back on their word to provide the results of the 120-day business review before fans renew season books.

He has urged fans to seek answers to a series of questions before doing so.

In his statement last Friday, the Glaswegian accused the Ibrox board of an "extreme act of bad faith" and revealed that a bank account will be set up for supporters to pay their renewal money into, with King and the former Rangers captain Richard Gough acting as the first custodians.

The Rangers board then released their own statement, accusing King of making a number of "untrue allegations" and insisting that he had told them in a private meeting last month that he would prefer other investors to provide the investment to fund the club's attempts to earn a place in the top flight.

"This board continues its habit of evading issues by attacking the integrity of any individual or group that speaks out against them," King said.

"I do not regard integrity as a character attribute that comes with an on/off switch.

"When I met with the board, the chairman requested that, other than the two public statements that we made, the balance of our discussions would remain private. I steadfastly honoured my undertaking. This board did not do likewise.

"In an ill-judged attempt to discredit me, they disclosed my comment that I preferred not to put money into Rangers if it could be found from other sources.

"In this instance they demonstrated their lack of integrity for no advantage as I had already, as part of my frank discussions with the fan groups, advised them that I had no prime ambition to invest further in the club but will do so if no other investors come forward.

"This attempt at a 'juicy' leak by the board merely proves that it is impossible to engage on a basis of confidentiality and integrity.

"The board has now stated that it was always its intention to only provide the business review after season-ticket advances had largely been paid.

"It has denied that it agreed the business review would be made available prior to fans committing to season-ticket advances even though I referred to this agreement in my public statement immediately after our meeting.

"The board allowed my public statement to go unchallenged. Presumably it had no concern with what I stated."

The end of Wallace's 120-day review comes on Thursday 17 April, three weeks before the deadline for season-ticket renewals. King's advice to supporters is to seek answers to his questions before deciding whether or not to renew.

Without an increase in season-ticket sales, Rangers could not be certain about their going concern status for the next 12 months, according to the notes in last month's interim accounts.

"Given that the board is quick to raise integrity and trust as key issues I would like to pose simple questions," King said.

"Does the board agree it is unfair to ask fans to buy season tickets before they consider the business review?

"Does the board agree that, given the present financial position of the club, it is appropriate to provide Ibrox and Murray Park as security against season-ticket advances?

"Does the board agree that in the latter half of December 2013 it was in discussions to obtain finance that would be needed prior to the end of the current season?

"Does the board agree that in the latter half of December 2013 it provided public assurances to the fans that the club had sufficient cash to last until the end of the current season?"