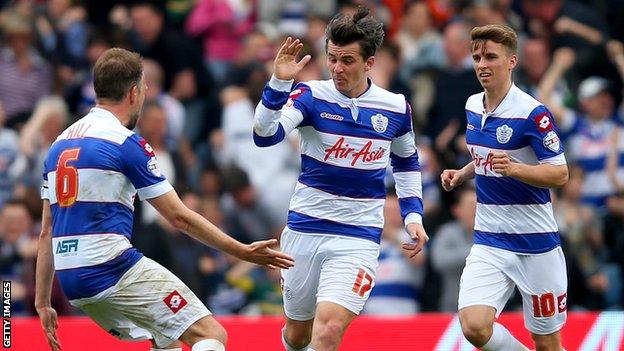 Sweden striker Mathias Ranegie swept in from close range to put the visitors ahead early in the second half.

Fourth-placed Rangers levelled through Joey Barton's precise free-kick from the edge of the Watford penalty box.

And the Hoops guaranteed a top-six finish when Austin curled in his 16th goal of the season.

Watford sit 12th in the table, six points adrift of sixth-placed Brighton with a game in hand and three matches left.

The Hornets were dominant from the start and Rangers goalkeeper Rob Green pulled off saves to deny Troy Deeney and Lewis McGugan.

Green pushed away Deeney's close-range effort after the interval but was finally beaten when Deeney knocked down Joel Ekstrand's cross and Ranegie span away from Richard Dunne and finished.

The hosts began to threaten and McGugan cleared a header from Austin before goalkeeper Manuel Almunia saved from Austin's drive.

Austin back in the goals

Charlie Austin's goal was his 15th in the Championship this season but his first since he sustained a shoulder injury in January. He has also scored once in the League Cup.

Barton's free-kick pulled the home side level and Austin guided a shot past Almunia from Bobby Zamora's pass to secure the victory.

QPR assistant manager Kevin Bond: "I was impressed with Watford. They started both halves better than we did but we eventually got hold of the ball.

"It was great for Charlie to get back on the scoresheet. We've missed his goals and missed his presence.

"Apart from what he does on the field, psychologically when the teamsheet goes up and he's not been on it, we know he has won us games.

"We now need everybody fit and in good form for the play-offs. We need to get the momentum."

Watford boss Giuseppe Sannino: "It was a very important game for us, almost a must-win game, and we were knocked down when we tried to score from a corner.

"They counter-attacked very well and we conceded in a game in which I think we produced the best performance under my regime.

"Maybe I became too British. I like your culture and will to win until the last second of the game and if I'd kept three defenders back at that corner we might not have conceded the goal.

"But I don't have regrets, because that's the way I like to be and I'm pleased with my lads because we tried to score."