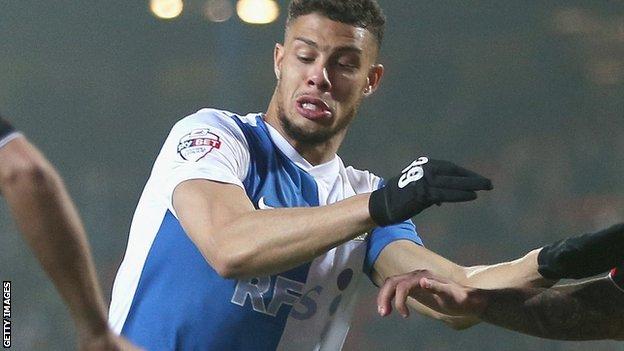 The away side went 3-0 up within the first 24 minutes, as Gestede struck twice before Todd Kane slotted home.

And Rovers grabbed their fourth on the stroke of half-time as former Cardiff striker Gestede headed in his third.

Lee Clark's men rallied. Nikola Zigic nodded in and Demarai Gray scored the second but the damage was already done.

The result leaves Birmingham in 21st position, one place above third-bottom Blackpool on goal difference, while Blackburn are now just two points off a place in the play-offs.

Gestede took just 10 minutes to get off the mark as he rose highest to head home Josh King's lob to the far post.

Ten minutes later, the visitors doubled their advantage as the same players combined with the same results, Gestede heading in King's free-kick.

Gary Bowyer's men effectively ended the contest after just 22 minutes when Kane's shot was deflected past the helpless Darren Randolph.

And a minute before the interval, Gestede completed a hat-trick of headers for a 4-0 lead. He could have had a fourth but saw his effort kept out by goalkeeper Randolph.

Birmingham pulled goals back through Zigic and Gray, but the defeat leaves them in deep trouble at the wrong end of the table, with three games remaining.

Birmingham boss Lee Clark: "I am confident in the players. We have to have the mentality that we have shown in second halves during this wretched run.

"We have to show this form from the first whistle. It seems that there is a domino effect. We concede the first goal and it results in two or three goals and four in the first half on this occasion.

"If we were to win our two home games then we should be okay.

"We were really punished and it was not good to watch. We responded well in the second half, but we certainly need to perform and our future is in our own hands.

"We have to get rid of the negative thoughts and go again."

Blackburn boss Gary Bowyer: "I thought we were terrific first half.

"Our football was good and the big man, Rudy Gestede, was unplayable. He took his goals ever so well.

"We always knew Birmingham would come and fight in the second half and that is exactly what they did, although we were disappointed with the two goals we conceded.

"But overall we have come away from home and scored four goals, which must be pleasing.

"We are now unbeaten in the last 10 games. It has been a very busy period for us and the quality of the squad shone through against Birmingham as we lost four players from last Friday.

"Everyone played their part and we now have to see what happens on Saturday."

Shots on Target
Home6
Away12