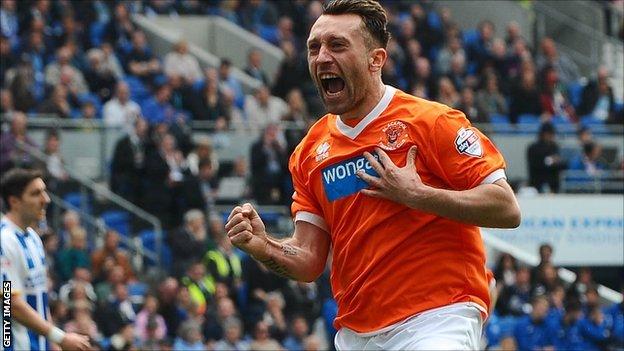 Brighton remain in the play-off places despite Stephen Dobbie rescuing a point for Blackpool, who are in the bottom three and face relegation.

Dale Stephens put Brighton in front with a wonderful curling strike from 20 yards just after the restart.

Dobbie levelled for the visitors three minutes later after smashing a 25-yard shot high into the net.

Albion pushed for the winner and Will Buckley missed their best chance late on as Blackpool held on for a point.

Both clubs have two games left but Reading, in eighth, can move ahead of the Seagulls if they beat Middlesbrough on Tuesday.

Blackpool, losers of 12 of their previous 15 away games, had an early opportunity when Stephens gave the ball away but Isaiah Osbourne's left-foot shot was turned round the post by Tomasz Kuszczak.

Stephens then tried his luck from the edge of the area and his low drive was taken by long-serving keeper Matt Gilks.

The Seagulls, unbeaten in their previous five games, almost broke the deadlock when an excellent corner from Stephens was headed inches over by top-scorer Leonardo Ulloa five minutes before the break.

Dobbie wasted a glorious opportunity to put the Tangerines ahead by dragging a shot wide after indecision at the back from Spanish defender Bruno Saltor.

However, Brighton caught Blackpool napping at the start of the second half, with Stephens curling in a beauty from the edge of the box to give them the lead.

The midfielder struck left-footed into the top corner after Ulloa chested down a cross by defender Stephen Ward.

Albion's lead did not last long though, with former Brighton loan player Dobbie equalising with an unstoppable shot in the 50th minute. He found the top right-hand corner after a backheel from Andy Keogh.

Keith Andrews, Stephens and Buckley all missed chances as the hosts, roared on by a crowd of 27,610, failed to find a winner.

"I'm disappointed not to take all three points, but it's difficult to win a lot of games in a row.

"We needed more tempo and more energy but we had the game under control. Although we didn't create as many chances as usual, we did enough to win in the second half.

"It is amazing to be fighting for this [play-off] place at this moment, bearing in mind what has happened this season. Better squads than us are not winning, so we will fight until the end."

"It was a great strike. [Dobbie] has quality and it's up to him to produce it more often.

"I let him play where he wants to. I've known him a long time and, apart from what he does on the ball, his work-rate off the ball is excellent.

"I've no doubt my boys have got that desire. They have reacted in the right way in the last two games."