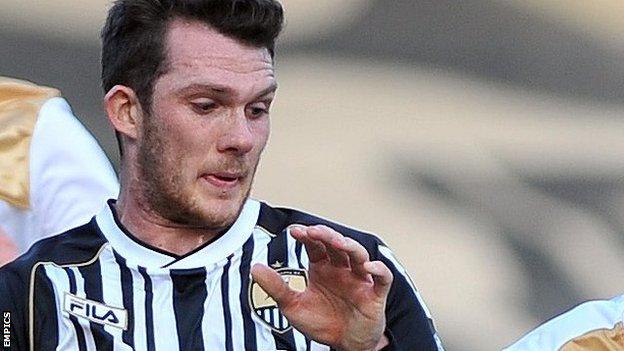 Notts County moved to within a point of League One safety as Jimmy Spencer's header secured a win over Crawley Town.

Notts recovered from an edgy start and Ronan Murray went close before Spencer grabbed his fourth goal in four when he headed home Alan Sheehan's free-kick.

Crawley were on top after the break and home goalkeeper Bartosz Bialkowski made fantastic saves from Matt Tubbs, Gary Dicker and Gwion Williams.

But Notts held on and are only a point behind Crewe, Tranmere and Colchester.

Crewe and Colchester played out a 0-0 draw while Tranmere drew 0-0 with Sheffield United.

"Dropping the 3 points on Friday was a hard pill to swallow.

"We knew this one was important - a must win because we have always said it will be the home results that determine where we are going to finish.

"You don't expect any favours and they made it hard for us. They caused us many problems, but with a little bit of luck we've managed to come out victorious."

"We seem to have a problem against teams in the lower half and I think it is a mental problem and it will need to be a lot better next season.

"We cannot afford to play against lower half teams and not perform.

"I think had the players gone about playing against teams in the lower half as well as they play against the teams in the top half Richie Barker would still be here.

"I've got to review contracts this week and look at everybody for next season.

"I have to look at everybody and think, who do I want to go to war with and whose going to roll their sleeves up and wear the shirt with pride?"