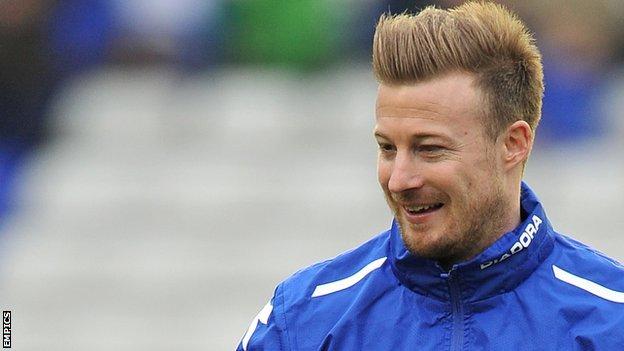 Stevenage were relegated from League One after a tame performance against mid-table Bristol City.

Only a victory would have kept alive the home side's slim hopes of avoiding the drop, but City's superior quality in the final third told.

Wade Elliott slotted a deserved opener from close range just before the break.

Baldock coolly scored the second and substitute Stephen Pearson converted another one-on-one chance to make it 3-0, before Luke Freeman's free-kick.

Freeman's stunning late effort at least gave something for the home fans to cheer on a miserable afternoon in which their side were second best for long periods.

The hosts started slowly and they could have been five or six down at the break had it not been for some inspired goalkeeping from Chris Day.

The visitors finally took the lead three minutes before the interval when the impressive on-loan midfielder Elliott scored after good work by Brendon Moloney.

Stevenage improved after the interval but a long ball forward caught their defence napping and Baldock calmly netted the second goal.

Visiting keeper Simon Moore made a couple of fine saves after that - notably to keep out a Lucas Akins effort.

But Pearson ran through to grab a third and, although Freeman's fine set-piece strike raised a healthy cheer among the Stevenage supporters, Steve Cotterill's side cruised to victory.

"I think they brought with them a very strong outfit. They've got some exceptional, probably Championship players in their squad.

"We've given youngsters their debut today. When you put youngsters, fresh out of the academy, up against lads who are costing a million quid, it's tough for them.

"The margin in the end could have probably been closer than it ended up in score terms, and there's plenty to be encouraged about in what we saw.

"I think the side gave a decent account of itself on the whole, bearing in mind the big players that were missing, the debutants, and the quality of the opposition."

"I think I would have enjoyed it a lot more if we had scored the goals our performance warranted.

"We weren't quite ruthless enough with our chances, coupled with some good saves from their keeper. But I thought their attitude was spot on."