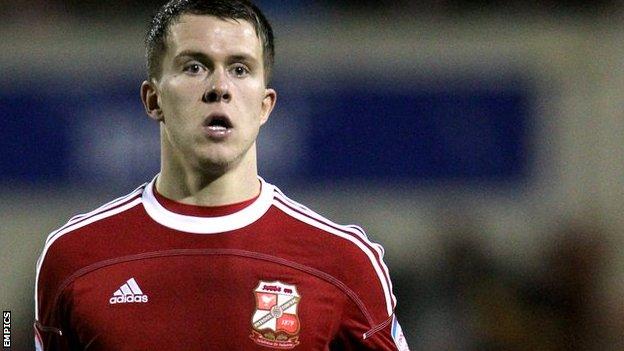 The Robins have now won six in seven but Peterborough's victory over Carlisle means they remain four points behind Posh with just two matches left.

Home goalkeeper Wes Foderingham made a superb first-half save to stop a Gary Jones free-kick.

Cox grabbed his first Swindon goal when he calmly shot right-footed into the bottom corner after 64 minutes.

Mark Cooper's men really should have taken the lead just before the hour but Michael Smith's goal-bound shot from a Miles Storey cross was kept out by Jon McLaughlan.

The hosts were the better side after Cox's goal and Alex Pritchard had the chance to seal the win, only to drag an effort just wide.

"I thought we totally dominated the game from start to finish.

"We just had to wait for that opportunity to come along. I was pleased with the maturity that we showed to control the game, sometimes it can be frustrating.

"We continued to play and moved Bradford across the pitch and waited for the gap to appear.

"Whatever happens this year we've finished the season in great fashion with two to play."