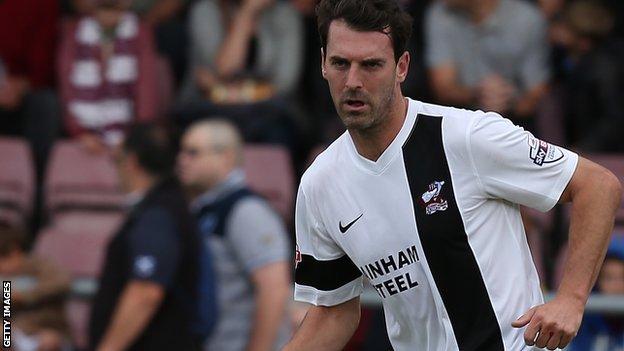 The Iron took an early lead when Matt Sparrow fired home from 12 yards after Sam Winnall miscued from a Michael Collins cross.

Alfie Potter had a great chance to equalise from the restart but dragged his shot wide.

The hosts dominated throughout and now need just two points from their final two games to be sure of promotion.

But their vastly superior goal difference means a point will probably be enough as fourth-placed Fleetwood are five points adrift.

Scunthorpe are also two points ahead of Chesterfield and Rochdale, who also both won.

Oxford's play-off hopes look to be over as they are now five points adrift of seventh place with two games remaining.

"I thought we were absolutely outstanding today.

"We passed it and moved it and created opportunities and we just needed a second goal. The last five minutes I have no idea what my heart rate would have been but close to collapsing I think after what's happened the last couple of week. The lads saw it through and deservedly so because for me that was a terrific performance.

"There has been lots of games where we have worked hard, we've put a shift in and we have not quite had the quality to finish teams off but today we married that up and we should have won by more."