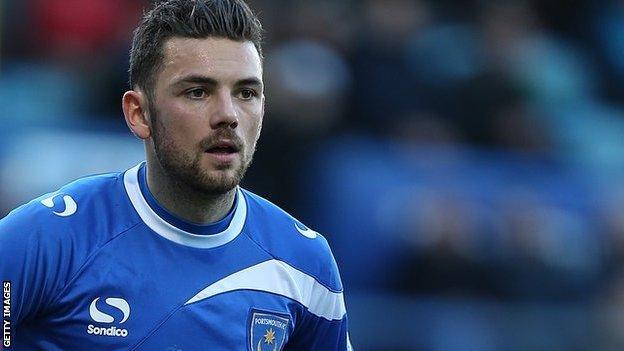 Danny East's early goal was enough to earn victory for Portsmouth and ensure Northampton remain in the relegation zone with two games of the season left.

Sonny Bradley wasted a good headed chance to make it 2-0 while Emile Sinclair and Darren Carter missed decent chances for the Cobblers.

The hosts dominated the second half but could not find a breakthrough and stay in the bottom two on goal difference.

Northampton are level with Bristol Rovers and Wycombe on 47 points, who also both lost.

Exeter are two points ahead after losing to bottom-of-the-table side Torquay United.

"The run we've had has been absolutely fantastic and the players deserve massive credit for what they've managed to achieve in the last five games.

"It just shows you how tight this league is. When we took over we were looking over our shoulders worried about the trap door, but thankfully that's gone away now and we can hopefully start to look upwards.

"I didn't pick the team to make it easy for anybody and I felt that the right thing to do today was freshen it up and luckily it worked today.

"I've got plans in my head in case I am manager here next season but there's no point going any further until I know what the situation is."