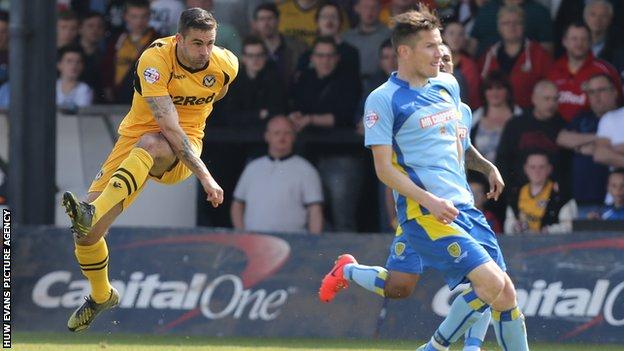 Andy Sandell gave the Exiles an early lead at Rodney Parade, blasting home a powerful shot from outside the area.

Michael Symes equalised for the Brewers from the penalty spot after Dominic Knowles was fouled by County defender Darcy Blake.

Burton, who are fifth, are now six points behind third-placed Rochdale with two games to go.

Both sides pushed for a winner after the break and Alex MacDonald hit the post for Burton with a long-range effort.

"I thought it was a very soft penalty.

"We saw it at half-time and the referee didn't have a good view of it.

"I thought he made a big decision and it was a costly decision on our behalf."

"Reaching the play-offs is a really good achievement. It was always going to be difficult to do that, particularly at the start of the season after losing the players we did.

"After a very, very poor start, it took us ten minutes or so to get going and we found ourselves one-nil down within that ten minutes. We got back into the game and we settled down a little bit. They started the second half a little bit brighter, but in the last twenty-five minutes we got into some really good positions.

"Unfortunately, we weren't able to nick the win, which I think would have been a little unfair on Newport too, because they're a tough, physical side and I thought that was a really committed performance from them."