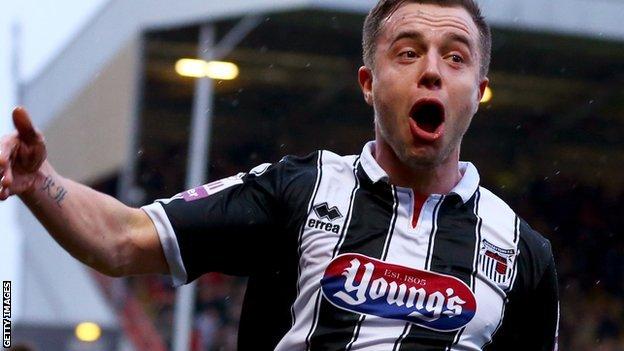 Both sides had good chances in a hectic opening but Town went closest when Hannah's fierce shot hit the woodwork.

Lenell John-Lewis fired an effort over for the Mariners after the break.

And Hyde's defence was breached on 75 minutes when Hannah, who scored a hat-trick against Alfreton, netted from 20 yards for his 15th goal of the season.

Hyde, who were relegated in March, went close through Jordan Lazenbury late on.

But Grimsby held on and are third, a point ahead of Halifax and Gateshead.

"I think from that performance it can't be anything but nerves from the players. No matter what I say when they are out there it's hard to change that.

"Of course people say they should be able to handle it and I am not going to say they can't or they shouldn't but it was hard to watch one or two players because it certainly looked like the confidence had been drained from them.

"We have got one game left for definite, hopefully we've got another four but I am not too concerned, I think it's another kettle of fish next Saturday depending obviously how we need to go there."