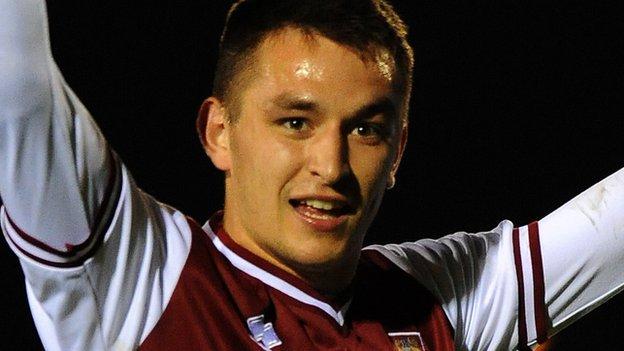 Aldershot Town all but secured their Conference Premier survival with a hard-fought victory against Woking.

Both sides created chances in an open first period but the first goal did not arrive until the second half when Shots striker Brett Williams scored with a penalty after Mike Cestor's handball.

But Mark Molelsey's deflected strike won it and took Shots three points clear of the drop zone with one game left.

Aldershot also have a vastly superior goal difference to Hereford and their other fellow strugglers, and are assured of their place in the league next season - barring a near 30-goal swing in the final games of the season.

"It was a very scrappy game, there wasn't much in the first half. They packed the midfield with four, as a rule, central midfield players and it was very narrow.

"The boys were a little bit disappointed in respect of the penalty because there was one in the first half as well where we were a bit unlucky not to have a penalty.

"All credit to Aldershot because they had a 10-point deduction at the beginning of the season and when I look at our situation this season I am very pleased.

"All I can turn round and say as a football club, I am very happy with our season on and off the field and there is a lot of stability to go forward."

"I think it's the same as any win really, [it's a] relief. Our sole aim was to stay up this season and we've made it hard for ourselves at times, but given that our budget was in the bottom six in this league and that we didn't have a team to start with, it's a massive achievement.

"It's taken everyone to do it with our players and staff and we have managed to stay up and we now look to the future.

"It's not about performances today, we had 11 players, and the subs that came on, who wanted it and battled hard and I don't care about the performance.

"It's the attitude of the players and everyone involved at the club and no-one gave up and I have got to give mention to the people unseen at the club and they have contributed hugely to everything."