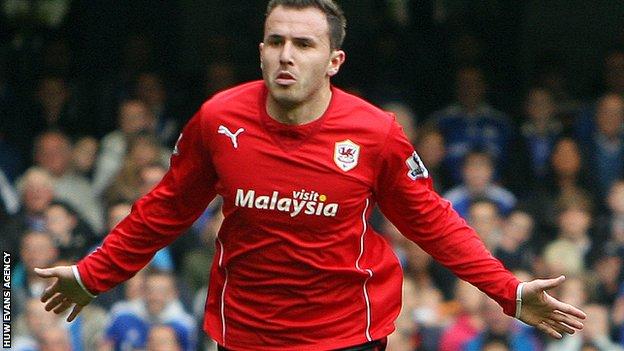 Midfielder Jordon Mutch hopes Cardiff's win at Southampton has proved the critics wrong as the club make a last-ditch attempt to avoid relegation.

The Bluebirds are in 19th place in the Premier League, three points off safety with four games remaining.

Cardiff had been criticised after leaking 12 goals in three games before Saturday's win.

"I don't listen to that sort of stuff. We proved a few people wrong," claimed Mutch.

"As a group we stick together, work hard and focus on what we are good at.

"We need to keep on focusing on ourselves. We have always believed we can stay up. We are a tough group."

Not only did Juan Cala's goal at St Mary's give Cardiff their first win in five league outings, it was also their first clean sheet since they drew 0-0 with Aston Villa on 11 February.

Mutch, who is the club's top scorer in the Premier League this season with seven goals, said the victory over Southampton was "massive".

"It was a great win for us. We kept our shape very well and got the goal we needed," he said.

"It's a clean sheet and that's what we needed going into [the Stoke City game].

"We have been determined all season. We will keep sticking together and working hard and hopefully we can push on.

"[We will] look to Stoke and hopefully the fans can push us on to get the three points."