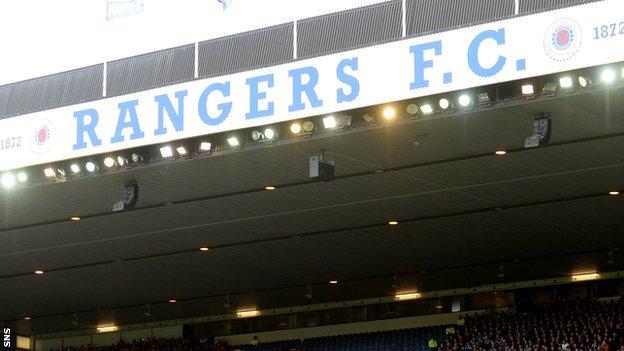 Online casino company 32Red have entered into a three-year agreement with the League One champions.

"It gives us a real platform of stability that we can look forward to," Wallace told the club website.

"We're working very hard to re-energise and reposition the fantastic Rangers brand on the international stage."

Rangers last month announced losses in the six months to January of £3.5m. and the club is embroiled in a war or words with former director Dave King, who has called on fans not to buy season tickets until the board has published a review of the club's business operations.

Wallace described the comments of the South Africa-based businessman as "nothing short of disgraceful" and that review is due to be published on 25 April.

"We're planning for the Championship, with one eye very firmly on the seasons beyond that," added Wallace.

"Having a strong commercial partnership portfolio is very important to the club, attracting a blue chip brand to be partners with the football club allows us to grow our commercial revenues and reinvest right across the business.

"We're delighted to have secured 32Red as an official cub partner. This is a good long term deal for Rangers. Work commenced several months ago, as part of looking at every area of our club operations, not just where we're spending the money but where we're generating it.

"We're looking at the launch of the Rangers membership scheme over the summer and we have three years to develop some exciting ideas to the benefit of the fans and the customer base of 32 Red. It is the first, tangible step in our new commercial strategy.

Speaking on Monday, 32Red chief executive Ed Ware said his company was looking forward to being part of "the continued rise and return of the club", which has "such heritage and potential".