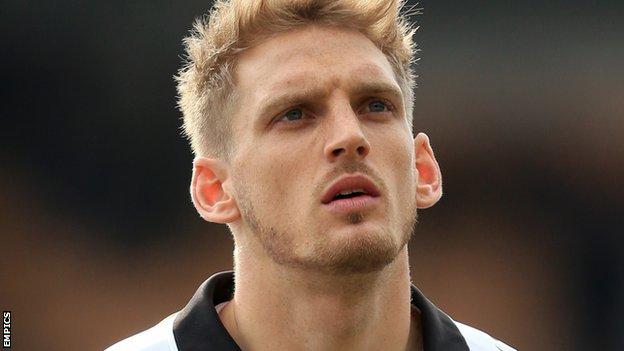 Loft, 27, has been ruled out for the rest of the season after suffering a suspected broken cheekbone in an altercation on Thursday.

It's another negative headline that, for some reason, this club attracts

But they have opted to sack Jones, 27, who had a further year on his contract.

Loft is out of contract at the end of the season.

The League One club have said that they will not be issuing any further statement until later this week.

Neither player - both of whom have been first-team regulars for the last two months - appeared in Saturday's 4-2 defeat at Notts County.

Vale, who came up from League Two last year, suffered a second straight defeat to fall 10 points adrift of the League One play-offs with four games left, ending any lingering hopes they might have had of a second successive promotion.

"It's been a poor week for us," Vale boss Adams told BBC Radio Stoke,

"For legal reasons, there's very little I can say other than on Thursday there was an incident between two players.

"The training ground incident resulted in one of the players, who I might add is an innocent party to this, receiving a facial injury that has consequently ruled him out for the rest of the season.

"It's another negative headline that, for some reason, this club attracts. But it has to be dealt with internally.

"Incidents like we had are disappointing, but they happen.

"The players who have represented the club over the past two years should feel proud. Even in the season when we went into administration, I was proud of everybody's efforts."