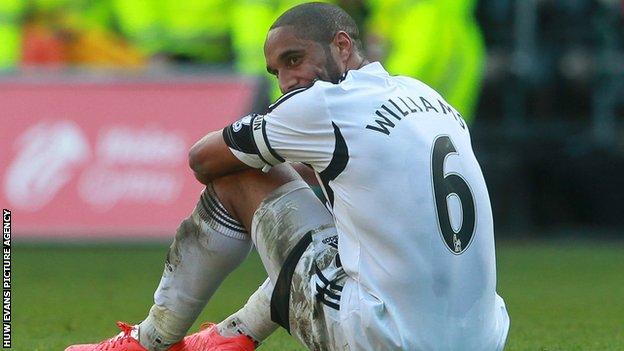 Wales captain Ashley Williams says Swansea City are unlucky to be involved in a relegation battle this season.

Defender Chico Flores was sent off in the 16th minute of Sunday's 1-0 home defeat by Chelsea, after being booked twice inside 120 seconds.

The result leaves Swansea three points above the Premier League's relegation zone in 15th, with four games to go.

"It does seem like the luck is against us this season for whatever reason," said Williams.

"The only thing to combat that is to just keep working hard."

Swansea travel to Newcastle United on Saturday, and Williams is urging his team-mates to put in the same amount of effort as they did against Chelsea.

"We just need to go there and win," he added. "We can't keep playing well for long periods of games and not win.

"We beat Norwich convincingly, we did well against Arsenal. Even against Chelsea, Wayne [Routledge] nearly scored and [Wilfried] Bony nearly scored to make it 1-1."

Swansea have only won two of the 13 matches Garry Monk has overseen as head coach since taking over from Michael Laudrup in February.

And Williams does not know why the club have suffered such a poor run of results.

"It's just bizarre," he said. "We train well. We're set up well. We go out a lot of the time and we do well and create a lot of chances. But we are where we are and that's just it.

"We've just got to keep fighting and keep working through it. I'm sure we'll be OK with the quality we have in the dressing room and the fight that we've shown against Chelsea. We've got to be OK.

"I think we need to concentrate on ourselves. If you are going to be in a relegation battle, you'd take our position rather than someone else's."

Swansea produced a spirited display against Jose Mourinho's title-chasing Chelsea, with the visitors only able to take full advantage of their extra man midway through the second half.

Striker Demba Ba latched onto Nemanja Matic's long pass before firing home from the edge of the area.