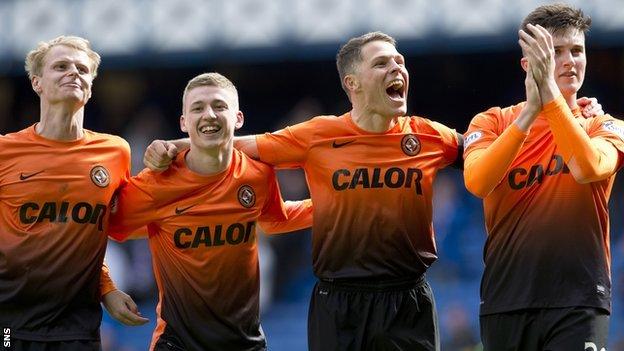 Dundee United assistant manager Simon Donnelly has no fears about his young side facing a more experienced St Johnstone in the Scottish Cup final.

United had to survive heavy pressure from League One champions Rangers before prevailing in their semi-final.

"These guys have shown they can go and handle the occasion on more than one occasion this season," said Donnelly, looking ahead to the 17 May final.

"Hopefully we can go out and put a performance on."

It is the pinnacle of the season, the last game and everybody wants to be in it and we're going to be involved now

United beat Saints 4-0 in their opening encounter of the season but have since lost to the Perth side twice before this coming Saturday's final Scottish Premiership meeting.

But they were back in the starting line-up against Rangers at Ibrox, joining Scotland Under-21 internationals Andrew Robertson and Stuart Armstrong in the United side.

"They are developing all the time," Donnelly told BBC Scotland. "You look to Saturday there - although we probably didn't play as well as we can, we were clinical and capitalised on any mistakes Rangers gave us and I think that was the difference in the end.

"Winning ugly possibly - we would obviously like to play a little bit better - but the boys are learning and that's only good for their future careers."

St Johnstone defeated Scottish League Cup winners Aberdeen 2-1 in their semi-final the following afternoon to ensure that Scotland's four senior trophies would all be won by different clubs.

It mirrors the season Donnelly lifted the Scottish Cup with Celtic in 1995-96 and the former midfielder thought it was good for the Scottish game.

"It attracts interest and excitement across the board," he said. "If you look at both sets of fans, St Johnstone and Dundee United, it is a great occasion for everybody connected with the club.

"Aberdeen have collected silverware as well this season. It is great.

"It is tremendous to reach the final. It is the pinnacle of the season, the last game and everybody wants to be in it and we're going to be involved now."