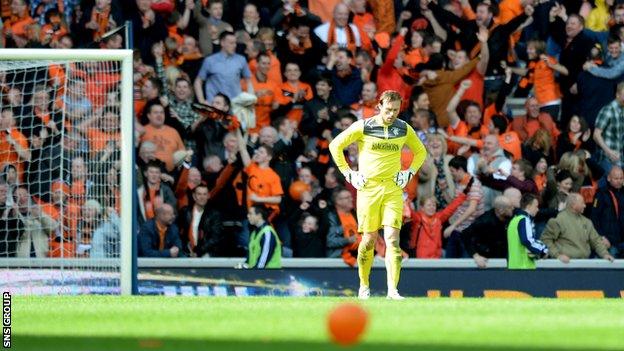 Rangers boss Ally McCoist backs Steve Simonsen over the error in defeat to Dundee United but has little sympathy for the keeper's social media troubles.

The 35-year-old closed his Twitter account after receiving abuse in the wake of a mistake late in the Scottish Cup semi-final at Ibrox.

"It makes me feel he shouldn't have been on it in the first place to be quite honest," said McCoist.

"I am seeing more negatives than positives from players on Twitter."

Simonsen was drafted in for only his second game since joining the Scottish League One champions after Cammy Bell suffered concussion.

And he was first to break the news of his probable involvement via social media.

However, the former Tranmere and Sheffield United goalie had a day to forget when a terrible touch on a back-pass led to Nadir Ciftci scoring to make it 3-1 to United.

"Maybe I'm an old dinosaur", McCoist added. "But I have said before, we have to be extremely guarded in what we do and what we say.

"Of course it was a mistake, an error, he is the first one to admit that.

"He also had probably the best save I've seen this season up at Forfar, one of the best three I've seen anywhere this season, so you take the good with the bad.

"As I say, on these social network sites you run the risk of taking abuse from a certain type of individual."