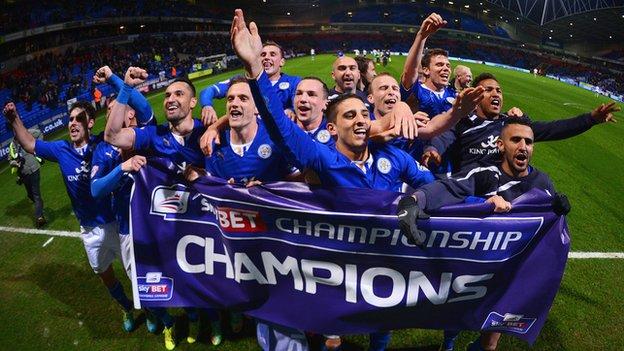 Leicester clinched the Championship title with two games to go following a narrow victory at Bolton.

Bolton almost took the lead after the break but striker Lukas Jutkiewicz was denied by keeper Kasper Schmeichel.

Lloyd Dyer's second-half goal proved decisive, the Foxes midfielder cutting in to find the net from distance with 25 minutes left.

And Leicester, who registered 20 shots on goal to Bolton's 12, deservedly recorded a 13th away win of the season in front of their 2,000 travelling fans.

They should have won with something to spare, as the influential Danny Drinkwater and Ritchie De Laet both tested keeper Adam Bogdan.

And they had strong penalty appeals turned down when Tim Ream blocked a shot from Anthony Knockaert as the visitors pressed for the opening goal.

Bolton came more into the contest in the second half, striker Jutkiewicz seeing his effort saved by Schmeichel as the hosts enjoyed their best spell.

But it only succeeded in galvanising the visitors - Dyer using his pace to find the net with a powerful shot after cutting in from the left.

Bolton pressed for an equaliser but could not find a way through as Leicester moved seven points clear of second-placed Burnley.

It is now just one defeat in 20 games for Premier League-bound City, who travel to Huddersfield on Saturday boasting the Championship's best away record.

"It was nice to win it ourselves, especially having gained promotion when we didn't play.

"I think it was nicer for the players to get us over the line tonight in terms of winning the league.

"It was great to be able to finish off the season well and we've got to 96 points, which is a really good total with two games to go, and I want the players to go on and try and get as many points as possible now."

"I'm building a team that is committed and is going to put their bodies on the line for the cause. You can start to see that in the second half of the season with our points tally.

"Leicester have done it in a way that I would like to copy with young, hungry players.

"They went and bought their players for a significant amount of money; we are going to have to find them a little bit rougher and polish them up."