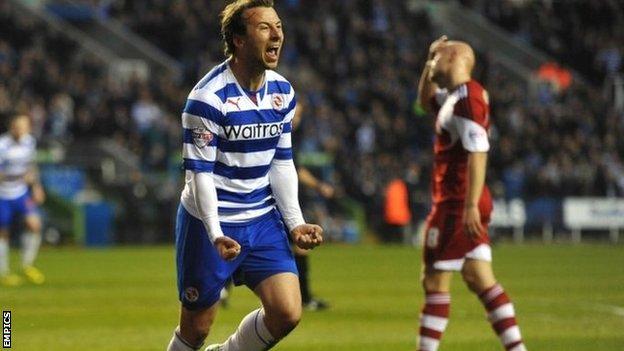 Adam Le Fondre's 14th goal of the season and a George Friend own goal helped Reading climb back into the play-off places as they brushed Middlesbrough aside.

The Royals recorded only a second win in seven matches to move into sixth, a point ahead of Brighton with two games of the regular season remaining.

Nigel Adkins' side surged into a comfortable two-goal lead inside 15 minutes, and should have won with more to spare as they outclassed mid-table Boro.

Before the visitors had time to recover, they were two goals down, defender Friend heading Obita's cross into his own net.

After Hal Robson-Kanu went off with a nasty head wound following an accidental first-half clash with Middlesbrough defender Ben Gibson, the visitors gained more of a foothold.

Midfielders Emmanuel Ledesma and Albert Adomah both went close to pulling a goal back for Aitor Karanka's side.

But Reading were soon back on top after the break, as Middlesbrough struggled to keep pace in their bid to record a third consecutive away win.

Only a good save from busy goalkeeper Dimi Konstantopoulos prevented Le Fondre from doubling his tally as the hosts dominated.

The Royals striker hit the bar late on, with substitute Pavel Pogrebnyak also going close to making it three.

"Our destiny is in our own hands. We were excellent: we had passion, we had hunger, we had walking wounded out there again and all credit to them.

"We started well, got two great goals and played some good football. You saw the togetherness of the team.

"Middlesbrough are a good side so it's an excellent result and it puts us in a play-off position with two tough games to come.

"We are still in the race and everyone knows when you get to the play-offs it's anyone's game."

"If Reading had needed more goals they could have scored them.

"It was my fault. It's difficult when you don't play for points but I didn't choose the right players and I couldn't motivate them. As a player I was competitive and I want competitive players."