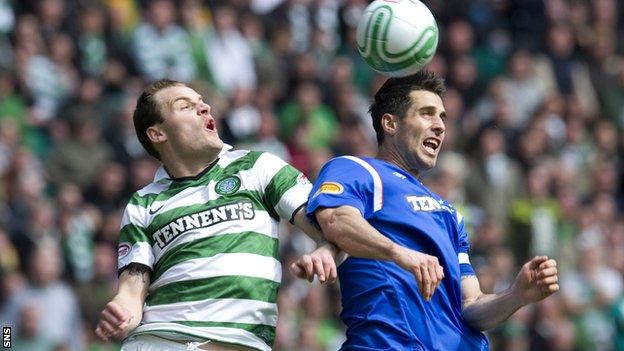 "Some fans may disagree but it will be good for the whole of Scottish football," said the 25-year-old.

Rangers will play in the Championship next term after winning League One - their second promotion in a row.

"It can only benefit the game when they do get back up," added Stokes, "But, for the time being, it's a good chance for the other teams to try and compete.

"We want as much competition as possible. We want to push ourselves to improve - if that means other teams improving or Rangers coming back into the league, so be it."

Stokes has scored 15 goals this term as Celtic wrapped up the Premiership title with seven games to spare.

With five league matches remaining, the striker is six short of his best tally, which came in campaign 2011/12, but the forward believes he is in the form of his career.

"I was one fire at the start of the season and then went through a spell where I couldn't buy a goal," he said.

"But the performances were there and I felt I was bringing a lot to the team, although I've not scored as many as I would have liked.

"The gaffer asked me to become more of a team player and I think I have shown that this season."

Stokes signed a three-year contract extension in October, having joined the club from Hibernian in August 2010.

The Republic of Ireland international was speaking at an event to encourage fans to vote for the best of Celtic's 102 goals so far this season. He volunteered a couple of his own as prime contenders.

"I'm going to be biased and say one of mine, probably the one against [Partick] Thistle," he joked.

"There have been some great strikes from the boys - Virgil's [van Dijk] free-kick [against Hibernian], Kris Commons's goal against Shakhter [Karagandy].

"The third goal against Shakhter was a great team goal - so there are plenty to pick from and it will be a tough decision."