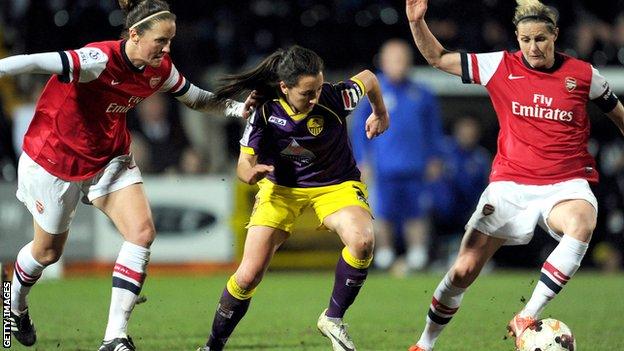 Scott's England team-mate Jess Clarke gave the hosts a first-half lead in front of a 1,583 crowd at Meadow Lane.

The Gunners were poor before the break, but much better in the second half and may well have won the game after right-back Scott levelled.

In the night's other game, Birmingham fought out a 0-0 draw with Everton.

County were well worth their interval lead, but Arsenal were by far the more dangerous team after the interval.

Winger Clarke, playing up front in place of the absent Ellen White, went close with a couple of early long-range efforts.

And she coolly opened the scoring in the 27th minute, side-stepping two defenders before sliding a low 15-yard shot just inside the far post.

As Arsenal hit back, striker Kelly Smith sent an 18-yard effort over the bar.

But the Gunners looked flat until starting the second half brightly.

And four minutes later, the scores were levelled when Scott drilled an 18-yard volley into the far corner of the net.

Smith was desperately unlucky not to give Arsenal the lead as her 72nd-minute free-kick hit the bar and bounced clear off the goal line.

Substitute Freda Ayisi then had a 12-yard shot headed off the line by central defender Sophie Bradley.

The Gunners could not force a winner, but will be boosted by their improved second-half display.

Three days before the first leg of their Champions League semi-final against Swedish team Tyreso, Birmingham had to scrap for a Super League point in front of 657 fans at their new Solihull ground.

Birmingham then had most of the first half but came no closer to scoring than Katie Wilkinson's 29th-minute shot that flew over the bar.

Danielle Turner then struck the post as the Toffees continued to look the sharper side in front of goal.

But eight minutes from time, Kirsty Linnett was inches from putting the home side in front, driving in a 30-yard shot that hit the bar.