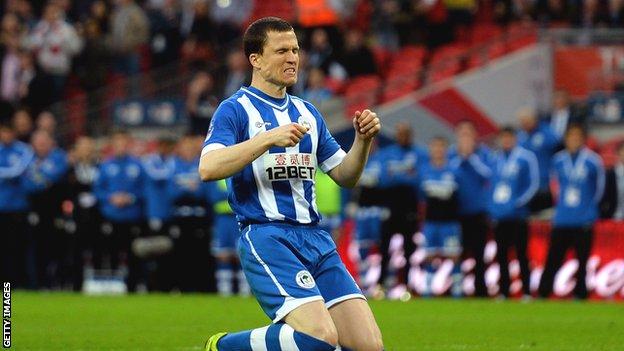 Wigan will use their FA Cup semi-final defeat by Arsenal as their inspiration to win promotion, says Gary Caldwell.

Caldwell was one of two players who failed to net their spot-kicks as the holders were beaten 4-2 on penalties.

Uwe Rosler's side are fifth in the Championship and aiming to return to Wembley for the play-off final in May.

"That disappointment and hurt can spur us on and get us over the line in the league," Scotland defender Caldwell told BBC Radio Manchester.

If we get back to Wembley, I don't think there are many teams that are going to want to play us there

The 32-year-old came on as a substitute to make his first appearance of the season after almost a year out with injury, but both he and on-loan midfielder Jack Collison saw their efforts saved by Arsenal goalkeeper Lukasz Fabianski in Saturday's shoot-out.

The Latics now have five games left to secure their place in the play-offs, starting with a home game against Reading on Friday.

"If we get back to Wembley, I don't think there are many teams that are going to want to play us there," said goalkeeper Scott Carson.

And full-back Emmerson Boyce added: "That [promotion] our aim now and we're determined to do it.

"We defended the cup proudly, got to the semi-finals and we held our own against a very good Arsenal team. We're determined to go back again at the end of the season and win the play-off final."